With Me rebranded as Emart 24

With Me rebranded as Emart 24 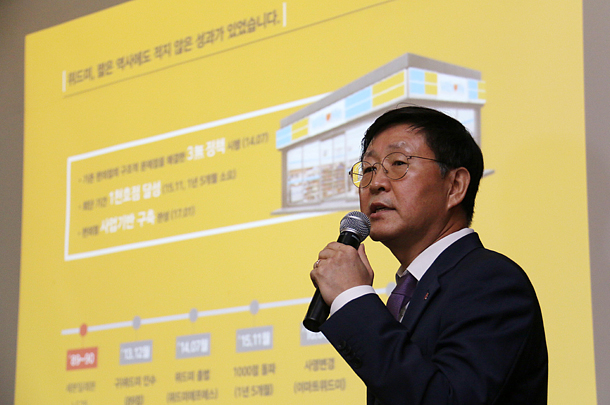 Kim Song-yong, CEO of Emart With Me, presents the With Me’s rebranding as Emart 24 at a press conference held at COEX, southern Seoul, on Thursday. [EMART]

Shinsegae Group announced Thursday that it will rebrand its sluggish convenience store brand With Me to Emart 24 in an attempt to strengthen its stance in the sector.

The idea behind the overhaul is to apply discount chain Emart’s recognizable brand identity to the convenience store chain. The former With Me brand had weaker brand power and recognition.

“The reform will make people immediately recognize that the convenience store is run by Shinsegae Group - this will pull up brand power and increase consumer confidence in our products and service,” said Shinsegae in a statement.

Apart from the brand name, Emart’s characteristic yellow color will be applied to the convenience stores’ interior. A corner will be dedicated to Emart’s in-house products including No Brand and Peacock.

“In the long run, our goal is to expand the stores to over 5,000,” said Kim Song-yong, CEO of Emart With Me at a press conference held Thursday at COEX. He added that the plan was to establish 1,000 new stores per year. Shinsegae had 1,765 With Me branches as of the end of 2016.

A latecomer to the market, Shinsegae is looking to differentiate Emart 24 from its peers by going premium. Shops will be built larger than typical convenience stores and in unconventional forms combined with cultural spaces.

The company tested the strategy this year, operating a number of With Me branches that did not fit the normal convenience store model. The brand’s Chungmuro branch in central Seoul, which opened in May, is four stories tall with two floors decorated as a cafe. In general the company found that these stores earned twice as much as non-premium branches.

The wider array of products based on Emart’s in-house brands will also be a differentiating point. “Although we’ll start with Emart’s brands, we plan to develop in-house brands under Emart 24 as well,” said a Shinsegae spokesman.

The drive behind this major overhaul is Shinsegae Group Vice Chairman Chung Yong-jin, who pinpointed convenience stores as the company’s core task in a business strategy meeting at the end of last year. He is said to have emphasized the importance of adapting to the rapidly changing demographics due to urbanization and the rise of single and two-person households.

Convenience stores are one of the few lucrative sectors in Korea’s retail market. Last year the industry raised 20 trillion won in revenue, an 18.6 percent increase year on year. On the contrary, department stores have been lagging due to the sluggish economy and duty free sales sharply declined this year due to the drop in Chinese tourists, their main revenue source, after Beijing halted organized trips to Korea following the Thaad deployment.

Regardless of the thriving industry, Shinsegae’s With Me has posted operating losses for the last three years that total around 75 billion won. With Me branches account for a mere 5 to 6 percent of convenience stores in Korea.

To discover ways to enlarge its share of the market, Shinsegae will also establish a research center dedicated to studying the convenience store market.

“The rebranding came from a desperate sentiment that a lack of innovation would inevitably lead to the company falling behind in the rapidly changing market,” said Chung. “The company will use all of our resources to develop the convenience store as a future growth engine.”