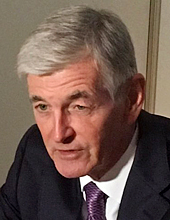 He also said Washington is capable of imposing secondary sanctions not only against China, but any companies or financial institutions supporting North Korea’s nuclear and missile development.

“The U.S. has already imposed secondary sanctions on one bank in China - and certainly that can be carried further,” said McHugh in an interview with the JoongAng Ilbo Tuesday in Seoul. “And it’s not just a matter of China. It’s a matter of wherever you find businesses or financial institutions that are supporting the North Korean missile program through their activities. We can certainly impose those sanctions.”

He added that the matter of secondary sanctions against third-country entities and individuals supporting the North’s illegal activities is “something that is being discussed amongst the allies, South Korea, Japan and the United States.”

A nine-term congressman of the House of Representatives, McHugh previously served on the U.S. House Permanent Select Committee on Intelligence from 2005 to 2009. He then went on to serve as Army secretary under the Barack Obama administration from 2009 to 2015.

“The Chinese, and also the Russians, need to understand by their being less helpful rather than more so, they’re actually making military intervention more likely, rather than less,” he pointed out. “That’s a last resort that none of us want to see occur.”

But he underscored that all nations had “a mutual stake” in resolving the North Korea nuclear issue.

“I don’t think China has any particular desire to see a nuclearized Korean Peninsula either,” he said, warning that such a scenario could lead to a regional nuclear arms race. “Should that occur, who knows what other nations, such as Japan and India, may take as steps they deem as necessary to secure their national interests.”

He also elaborated on U.S. President Donald Trump’s remark that “all options are on the table,” saying, “The most extreme option is military intervention.” He said, while this is undesirable, “We’re not going to discount whatever steps are necessary to stop what the United States believes is an existential threat to not just our nation but to our allies… It’s there, and would be available if there is no other recourse.”

When asked what it would take for the United States to take military action, he said, “When everything else has been tried and exhausted and North Korea, at least in the eyes of our analysts, has developed a fully operational, fully capable ICBM that’s able to deliver a nuclear warhead to the United States and our allies.”

North Korea grew closer to this with its latest ballistic missile test on July 4, which Washington confirmed was an intercontinental ballistic missile (ICBM). The former Army secretary called this an “important step and one that we take very seriously.”

While there is still some time before North Korea will be able to mount a miniaturized nuclear payload on a missile that can successfully strike the U.S. mainland, he said, “If North Korea continues to pursues this very unwise path, we have to assume at some point they will reach it.”

China, rather than focusing on its own national safety, is trying “to control the internal defensive posture of a neighbor,” he said, characterizing this as “a dangerous and slippery slope.”

He also dismissed concerns over the possible delay of the Thaad deployment to Korea for up to a year so that local officials can conduct an environment impact assessment. “We hope it isn’t that long,” McHugh said. “We understand President Moon [Jae-in]’s interest in having the issue looked at, particularly from the environmental perspective, and we respect the processes of the South Korean government to do that appropriately.”

McHugh, who is on the board of directors of the Washington-based think tank Atlantic Council, met with Korean Minister of Foreign Affairs Kang Kyung-wha and other officials during his visit to Korea. He was also involved in preparing for opening the Atlantic Council’s Asia Center.

Barry Pavel, a senior vice president and director of the Brent Scowcroft Center on International Security at the Atlantic Council, recommended measures, short of military action, geared toward getting Pyongyang to the bargaining table.

“If we keep doing what we’ve been doing,” he said, “then over time, our publics will lose confidence in our alliance because the threat will grow, and they’ll say: why are things getting more dangerous when we have such a robust alliance?”

To brace against North Korean nuclear capabilities, he said a “high pressure containment policy” is needed.

This could involve Washington working together with Seoul “on a list of needed military capabilities to deal with a new threat.” Such capabilities could include deploying bombers, special operations forces and other types of robust military forces.

He said such capabilities ? unlike the Thaad system, which he said is “a purely defensive system and in no way threatens China” ? may be “dual-purpose,” while “some of them could be used for offensive purposes.”

Pavel also recommended continuing Washington’s offensive cyber campaign to disrupt North Korean programs initiated under President Obama, pointing out, “Since then, the failure rate of missiles tests has gone up much more significantly.”