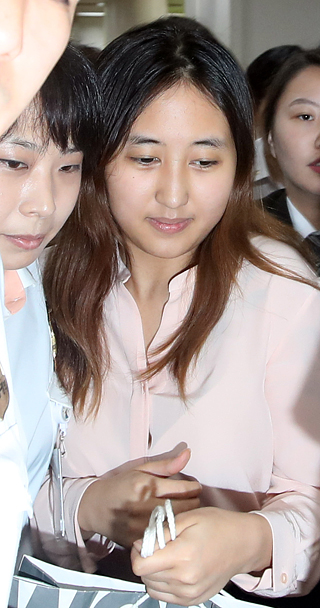 Chung Yoo-ra makes her unexpected appearance at the Seoul Central District Court on Wednesday as a witness in a trial for Samsung Electronics Vice Chairman Lee Jae-yong. [YONHAP]

Chung Yoo-ra, the daughter of former President Park Geun-hye’s longtime confidante and an alleged beneficiary of Samsung Group’s bribes, has bombarded Lee Jae-yong, the de facto head of the conglomerate, with unfavorable testimonies after making a surprise appearance in his trial on Wednesday.

The 21-year-old daughter of Choi Soon-sil showed up at the Seoul Central District Court at 10 a.m. on Wednesday as a witness of the independent counsel, which acts as the prosecution, in Lee’s trial. The 48-year-old tycoon was prosecuted on Feb. 28 with four other Samsung executives for having offered bribes worth 43 billion won ($38 million) to Park and Choi in 2015 and 2016. Following Park’s impeachment and removal from office in March, the trial began in April. Both Choi and Park are also standing separate but related trials.

Throughout an investigation and trial, Lee insisted that Samsung was extorted to give the money, which mostly comprised contributions to foundations Choi controlled. But the independent counsel saw them as bribes in return for political favors to solidify Lee’s control over the country’s largest conglomerate. Samsung’s generous sponsorship of the equestrian training of Chung was also described as bribes.

Chung, however, made a bombshell revelation on Wednesday on the details of Samsung’s support for her training. Samsung provided her three expensive horses, Salcido, Vitana V and Rausing 1233 in 2015 and 2016. Choi swapped Salcido and Vitana V with Vladimir and Stasha in September, as the first media reports about the scandal began. The independent counsel argued that the trade of the horses was intended to cover up Samsung’s tie to Choi.

Chung testified that Samsung must have known about her mother’s trading of the horses. “I telephoned my equestrian coach, Christian Kamplade, in June and asked him about it,” she said. “He told me that my mother, [former Samsung Electronics president] Park Sang-jin and [former executive director] Hwang Sung-soo met in Copenhagen, Denmark, the day before trading the horses.”

She also said she has an audio recording of the conservation and that a broker for the deal also complained to her in English, “Samsung needs to pay me,” referring to delayed payments.

After the independent counsel discussed Samsung’s claim that Choi unilaterally made a decision to trade the horses without the company’s knowledge or approval, Chung said, “My mother told me that Samsung ordered to change the horses. It makes no sense that they were not aware of it.”

She added, “My mother told me that things will get noisy if word gets out Samsung is supporting just me before other athletes join the program.”

Lawyers representing Lee said Chung was only 18 years old when the deals were signed and she was not involved in the negotiations. Chung probably gave a testimony wanted by the independent counsel in order to avoid another warrant hearing, the lawyers said. The prosecution made two attempts to detain Chung, but both requests were rejected by a local court.

The motive of Chung’s appearance in the courtroom was also debated. While Lee Kyung-jae, Chung’s lawyer, who also represents her mother, told the court Chung would not testify on Wednesday’s hearing, Chung informed the prosecution earlier in the morning her intention to make an appearance.

“She left her home around 5 a.m. and boarded a car in front of her house,” Lee said. “And then she disappeared. The prosecutors took her for more than five hours without access to her lawyer. This is a crime.”

The court said Wednesday that the final hearing of Lee’s trial is scheduled for Aug. 2. The sentencing is expected to take place in late August. The warrant for Lee’s detention expires on Aug. 27.