The dilemma of two presidencies

The dilemma of two presidencies 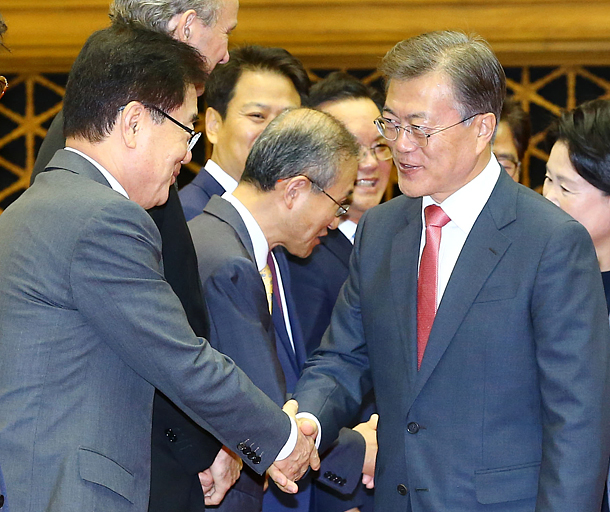 President Moon Jae-in, right, greets government officials after returning from his trip to Germany for the Group of 20 summit on July 3. [JOINT PRESS CORPS ]

A voice in the dark whispers into the ears of President Moon Jae-in, who just completed a packed diplomatic schedule. “I congratulate you on your success during the Korea-U.S. summit and Group of 20 Summit amid a serious crisis. Korea’s security situation will be managed with stability, and the country’s prestige was raised. Despite the success, domestic political deadlock continues, and it is extremely unfortunate that the supplementary budget and government restructuring bill have not passed yet.”

The dark but sweet voice makes sense, but it is also extremely dangerous. It is Moon’s undeniable accomplishment that he managed to smoothly conclude the Korea-U.S. summit despite his inexperience in diplomacy, because it could have been a disaster. Furthermore, expectations were high for Moon’s participation in the G-20 summit because he was elected after the impeachment of his predecessor.

But making a comparison between diplomatic accomplishments and domestic politics is a risk that will mislead Moon. All presidents face the dilemma of “two presidencies.” Although the president is one person, he or she needs to perform two completely opposite roles at the same time. In the arena of foreign policy, the president’s leadership is largely supported, and he enjoys special prestige as the protector of national interests. Therefore, a challenge to a president is rare in foreign policy, though there are still exceptions like the controversy surrounding Thaad.

On the other hand, the president becomes just a mere participant of tiring factional politics when he needs to push forward domestic policies. For example, opposition parties are not easily lending support to Moon’s supplementary budget and government reorganization bill, even though the legislation’s intention is to serve the people. The opposition parties are destined to demand political spoils in return for passing the bills.

Presidents often face the temptation of avoiding the two presidencies dilemma by resolving domestic politics in the way he handles foreign policy. The temptation is as strong as the temptation of being an imperial president. Political scientists in the United States who have observed the presidential system for a long time have presented some resolutions to the dilemma, and they can be inspiration for Moon.

From this perspective, Moon’s situation is not bad. His approval rating, the key resource, is as high as 75 percent, and he also has ample time as he just started his term. If he decides to actively negotiate with opposition parties, rather than just pressuring them, he will likely gain the upper hand in negotiations.

The second resolution is a rather unconventional one. Moon probably sees a growing number of aides who praise his accomplishments in diplomacy while contrasting them with outdated domestic politics and an exhausting tug-of-war with opposition parties. Aides who are trapped in the power struggle cannot guarantee the success of the president.

Moon must act as the “intelligence processer-in-chief” instead of just relying on presidential secretaries’ briefings and assessments. In other words, he needs a variety of communications channels to find to resolve legislative gridlock and listen to the people. Facebook, Google and Naver keywords and candid phone conversations with longtime friends will allow Moon to find a balance in information, persuade opposition parties and pass his bills.

We have struggled to cross the valley of the imperial presidency by impeaching Moon’s predecessor and launching a new government. Now, the challenge before Moon and Korea’s democracy is how he will overcome the dilemma of the two presidencies.

*The author is a professor of political science at Chung-Ang University.