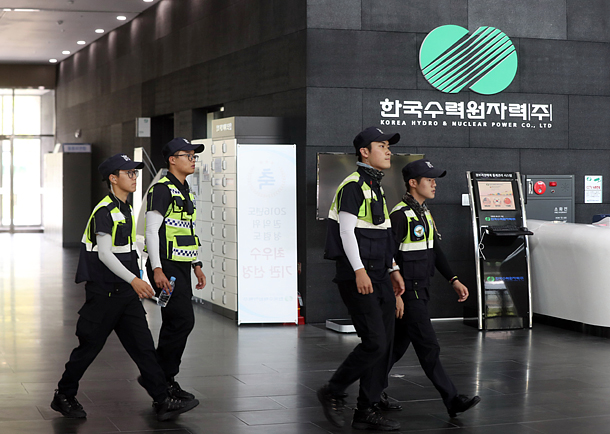 Police are dispatched to the Korea Hydro & Nuclear Power Corporation’s headquarters in Gyeongju, North Gyeongsang, on Friday. The board tried to hold a meeting to halt the construction of two reactors on Thursday, but wasn’t able to due to protests. The board met at a nearby hotel on Friday and passed the motion. [YONHAP]

Korea Hydro & Nuclear Power Corporation, which operates the country’s nuclear power plants, held an emergency board meeting on Friday morning and decided to temporarily halt construction of the Shin Kori 5 and 6 reactors.

The meeting, which was supposed to be held at its headquarters on Thursday, couldn’t be held because labor union members and people living near the construction site blocked board members from entering the building.

On Friday, board members met at a nearby hotel to push forward with the vote.

Construction actually was halted June 27 on the order of President Moon Jae-in, who is trying to wean Korea off of nuclear energy.

“We had concerns over damaging our credibility by holding a board meeting urgently, but decided to do so as we believed we will ease worries that people have by discussing the construction issue with public,” said a representative at the KHNP. “We will halt the constructions for three months after a commission that will consult public opinion on the project is created. If the commission fails to reach agreement within three months, we will hold another board meeting to discuss what to do.”

President Moon announced at a June 19 ceremony to permanently shut down the nation’s oldest nuclear power plant Kori 1 reactor that he would let the public decide the fate of the Shin Kori 5 and 6 reactors, which are 28.8 percent complete. Some 1.6 trillion won ($1.4 billion) has been spent on them to date.

“We estimate the cost of the suspension at about 100 billion won for storing equipment, managing the construction site and compensation for construction companies during the three months of suspension,” said the representative at KHNP. “We will come up with ways to reduce the damage and negative impact the decision might have on the regional economy.”

The Office for Government Policy Coordination is creating a commission of nine members that will conduct a public assessment of whether to complete the two reactors. The commission will not have any representatives from the nuclear engineering or nuclear power industries, which has raised concerns among experts in nuclear power.

“Public hearings on the construction of nuclear power plants were held before construction began in northern Europe in the past,” said Kim Tae-yoon, a public administration professor at Hanyang University. “It is very rare to proceed with a public assessment of nuclear reactors that already are being constructed, so it will be more complicated and take more time.”

If the Shin Kori 5 and 6 reactors are permanently shut down, this will be the first time in the country’s history that the plug was pulled on reactors under construction. According to sources in the nuclear energy industry, the United States, Taiwan and Philippines are the only major countries in which that has occurred.

“The United States suspended new construction of nuclear power plants in the 1980s and expanded its dependence on natural gas and coal-powered plants, but wasn’t able to completely give up on nuclear power,” said Kim Chang-rak, a professor of nuclear engineering at the Kepco International Nuclear Graduate School. “Starting in the late 1990s, the greenhouse gas emissions issue became a hot topic and the U.S. government resumed construction of nuclear power plants since they are better for the environment.”

KHNP might face lawsuits following its Friday decision. The company’s union said it will file a criminal lawsuit against the board for misappropriation for deciding to halt construction and then having to pay compensation to companies building the plants.

Construction companies like Samsung C&T, Doosan Heavy Industries and SK E&C are not expressing concern about the KHNP’s action Friday. They are waiting for any permanent shut down. But they said they want to hear clear directions about possible compensation for the losses they are likely to face from the suspension.

There are about 760 companies and 50,000 workers involved in the construction. The workers will be laid off temporarily, or until the final decision is made.