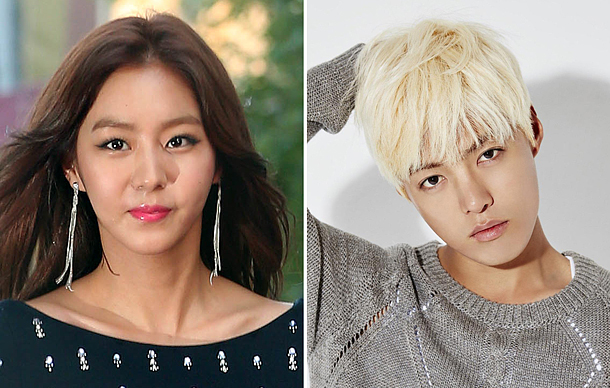 Early Friday, Yonhap news first broke the news that Uee and Kangnam were in a three-month relationship, quoting industry insiders. “The two first met through the program ‘Law of the Jungle’ and are slowly building a relationship.”

Uee’s agency Yuleum Entertainment was quick to deny the rumor only ten minutes after the news broke, saying, “Our client’s relationship with Kangnam isn’t true. They are only close friends.”

Kangnam’s agency Jungle Entertainment showed an indifferent manner, saying “Whether it is true or not, that is Kangnam’s private life. We can’t officially say if he’s dating or not.”

Uee then took to Instagram to deny the rumor herself, saying, “I became friends with Kangnam and we have met a few times, but it’s saddening that everyone is seeing this as dating. If I do get in a relationship with someone, I’ll announce it myself.”

Although it looked as if the artists had put a stop to the rumors, Dispatch suddenly released paparazzi photos of the two dating and hugging each other. Dispatch specializes in uncovering celebrity relationships.

Minutes later, Yuleum Entertainment said, “We would first like to apologize for creating confusion and for taking a long time to prepare a full statement. The reason why Uee and we had to deny the rumors initially is because Uee feared that the headlines might have an adverse effect on her upcoming drama. After discussions, we have decided to confirm her relationship with Kangnam.”