Chong Kun Dang head is sorry for cursing at drivers

Chong Kun Dang head is sorry for cursing at drivers 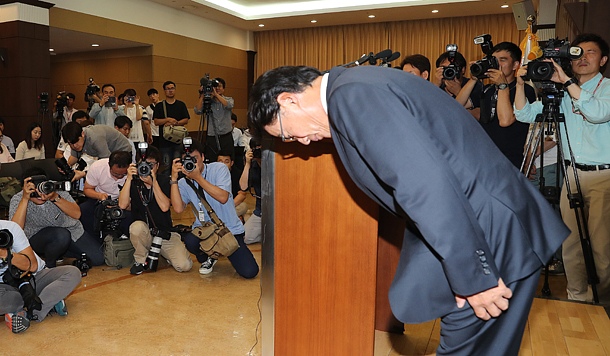 Rhee Jang-han, chairman of the pharmaceutical company Chong Kun Dang, bows his head in apology at the company’s headquarters in central Seoul on Friday. Voice recordings of him verbally attacking and shaming his drivers were disclosed on Thursday. [YONHAP]

Rhee Jang-han, chairman of the pharmaceutical company Chong Kun Dang, apologized on Friday for mistreating his chauffeurs after voice recordings released a day earlier showed him cursing out his drivers.

“I seek forgiveness to those who have been hurt by my actions,” Rhee said at the company’s headquarters in central Seoul. “I also apologize to everyone who has had affection for Chong Kun Dang as well as our employees who may have been disappointed by the recent happening.”

The chairman blamed the actions on his negligence and said he would accept any criticism. “I will find the best way to comfort those who have been hurt and take this opportunity [for me to] mature a step forward,” Rhee said.

After bowing his head, the chairman hurriedly left without taking any questions. It is unclear whether he will take a backseat in management and whether the company will compensate the drivers.

Rhee has reportedly not met with his former chauffeurs.

The pharmaceutical mogul garnered public criticism after several of his former drivers released voice recordings said to have been recorded between 2015 and 2016 on Thursday.

In the recordings, Rhee could be heard swearing at his employees and deriding them. It has been reported that three to five drivers quit after working for just a year.

One of the drivers in the recording said he had never been so stressed in his 23-year career as a driver, and said he lost 7 kilograms (15 pounds) and was taken to the emergency room because of the stress from working under Rhee.

In one recording that lasts almost 8 minutes, Rhee accuses his driver of being insubordinate when the driver doesn’t respond to a driving tip he gives him and tells him to quit if he doesn’t want to drive.

Rhee also tells the driver to shut up when the driver tells him he has been doing it professionally for 23 years and driven more than 1 million kilometers (62,000 miles).

Later in the recording, Rhee does apologize after the driver asks him to stop, adding that not even his parents have sworn at him, though Rhee insists the words he used weren’t swears.

In another recording, the chairman calls his driver “dull” and “fat” and tells him to leave the company, saying, “What did your father do to even fail to properly teach [you]?”

In another recording, Rhee tells the driver that he is being paid to work and that he shouldn’t forget it. “I’m paying you,” he said. “Who wants to see a person that is paid to work in a messy way?”

Since the recordings were released, the company’s share price has fallen sharply, losing 1.41 percent on Thursday and 2.58 percent on Friday, even as the index it is listed on, the Kospi, has been breaking records.

Chong Kun Dang said no changes will be made to the chairman’s current position.

“Since 2013, we have converted into a holding company and the companies [affiliates of Chong Kun Dang] have been run under CEOs,” a company spokesperson said.

The company said the chairman will remain its largest stakeholder.

Although Rhee apologized to the driver in one of the recordings, the company said because he did swear, the chairman issued an apology.

“The most important thing is that he apologized,” the spokesperson said.

Police said Friday that they have begun investigating whether Rhee also physically abused or threatened his drivers.

Rhee took the reins of the company in 2013 from his father and company founder, Lee Chong-kun.