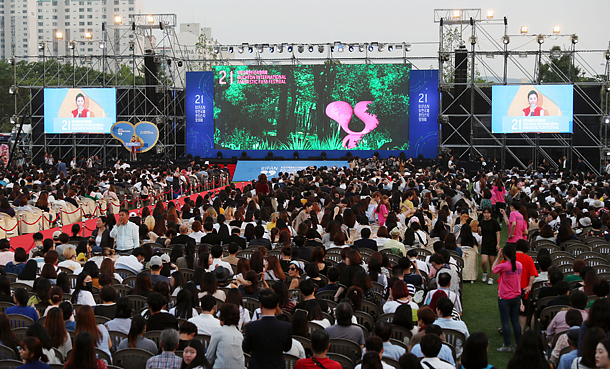 The 21st Bucheon International Fantastic Film Festival kicked off Thursday with a lineup that reflects its location and status as Korea’s largest genre film festival.

Of the 289 feature and short films being screened from July 13 to 23, 109 come from Korea, underscoring the festival’s vital role as a platform for the local film industry. The number of Korean titles was up greatly from 65 last year, while the size of the entire lineup remained almost unchanged from previous years.

Last year, the festival established two new categories exclusively for Korean feature and short films to discover and support Korean genre films. It increased the number and range of films invited in the sections this year.

The 11-day festival opens with the world premiere of Korean director Lee Yong-seung’s comedy-action thriller “Room No. 7.” The film starring Shin Ha-kyun and Do Kyung-soo, better known as D.O. of K-pop boy group EXO, follows a self-employed worker and his young assistant’s struggle to survive in the era of neoliberalism.

The closing-night film is the Korean premiere of “Gintama,” a live-action film based on the popular Japanese manga of the same title authored by Sorachi Hideaki.

Among other highlights are retrospectives of films by late Korean director Hong Ki-seon of “Where the Truth Lies” (2009) and of 17 films spanning Cannes-winning Korean actress Jeon Do-yeon’s 20-year career.

Hong, a legendary figure in Korea’s independent film industry, suddenly died three days after he finished filming the “The Discloser,” his fourth feature. The posthumous work will have its long-anticipated world premiere in the “Hong Ki-seon: The Cinema Beyond Suppression” section.

Starring Kim Sang-kyung and Kim Ok-bin, the film is about a soldier and a television reporter who delve into corruption in the military, which is related to first-class secrets.

Among Korean and foreign celebrities coming to visit the festival were actress Jeon Do-yeon, director Lee Yong-seung of the opening film “Room No. 7,” and its main actors Shin Ha-kyun and Do Kyung-soo, as well as actor Kim Eui-sung, a jury of the “Bucheon Choice: Features” competition section.

Spanish genre film master Alex De La Iglesia and Korean actor Cha In-pyo, who recently announced his plan to venture into Hollywood as both an actor and producer of the upcoming film “Heavenquest: A Pilgrim’s Progress,” will also visit Bucheon for the festival. It will be his directorial debut.