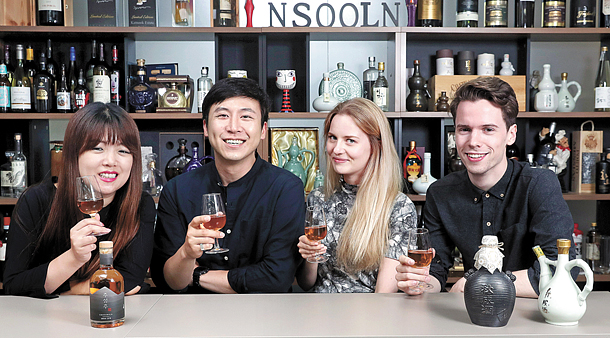 Two Nordic designers have revived an ancient Korean form of rice wine without leaving behind its sense of history.

Milla Niskakoski of Finland and Erlend Storsul Opdahl of Norway came to Korea in 2011 and 2013 after studying product design in their home countries. They studied at Hongik University’s International Design School for Advanced Studies, where they met Shua Jo, and the three of them founded Almond Studio.

Their new product is a label for a company making chuseongju, a traditional Korean rice wine. The name itself, “Chuseong,” is the former name of Damyang, South Jeolla, a region known for its bamboo forests, and so the drink was formerly sold in bamboo containers. But Almond Studio has produced a transparent glass bottle, like the kind used to carry whiskey, as well as a ceramic bottle, and a label that features the image of a seonbi, or Joseon-era scholar, walking along a mountain ridge.

“The ‘seonbi’ character, who supposedly enjoyed this drink, was intriguing for me,” said Niskakoski. The Finnish designer said they chose such imagery after hearing that these scholars relished drinking liquor and reading books while in nature.

It was Lee Ji-min, head of marketing and advertising at the firm PR 5th Ave, who told them about seonbi. Lee is a connoisseur of traditional Korean liquor, who launched web content introducing such drinks in 2014. 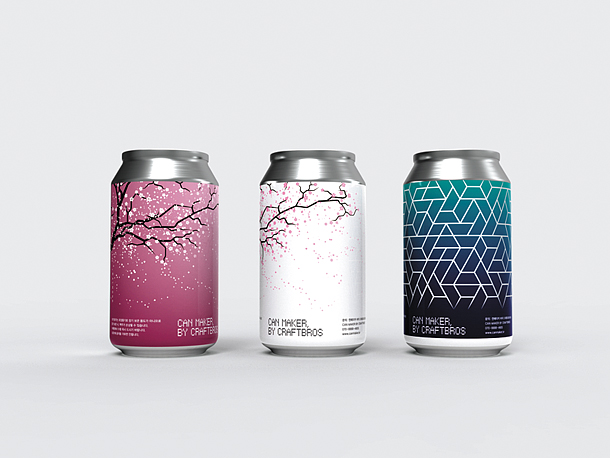 “Old breweries can hardly afford to pay for bottle design, which is why they use simple plastic bottles with shoddy labels,” explained Lee. “As a result, people began to see traditional drinks as cheap liquor.”

Lee thought traditional Korean drinks needed an extreme makeover, so after persuading the son of Yang Dae-soo, a brewing master and the maker of chuseongju, who heads the distiller Chusunggoeul, he met with the designers from Almond Studio.

On their first meeting, Lee brought 15 bottles of traditional Korean drinks, most of which even Jo had never seen before.

Storsul Opdahl said he was quite surprised to see so many different types of drinks, all boasting different ingredients, tastes and smells. He said he wanted to make a label that would get people interested in what was inside.

“I wanted to let Niskakoski and Storsul Opdahl know that chuseongju was something seonbi drank while in nature,” said Jo, “so I took them out to the waterfront by the Han River. I showed them ink-and-wash paintings and told them about seonbi attire. Design is about storytelling and feeling.”

Lee and the team will get together again after a couple of weeks to try to create a label for yet another traditional Korean liquor.

“The shape of the bottle and design of the labels are very important for drinks,” said Storsul Opdahl, citing Coca-Cola’s signature design. “Korean traditional liquors are unique and have their own stories, stirring up the imagination of the designer.”