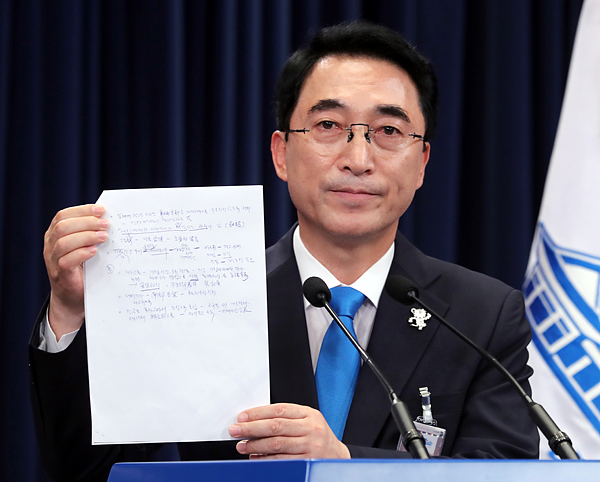 The Blue House said Friday it has discovered a lengthy paper trail of misdeeds left by the ousted Park Geun-hye Blue House and offered copies of key documents to an independent counsel to back up abuse of power and bribery charges against the impeached leader, her confidante and major Korean companies.

Park Soo-hyun, spokesman for President Moon Jae-in, held a press briefing in the afternoon and made the bombshell revelation. According to Park, documents were found on July 3 inside a cabinet in the civil affairs secretary’s office. They were discovered when furniture was being rearranged.

“They are minutes of meetings and reports,” Park said. “There are about 300 documents.”

The Blue House decided to send copies of some reports to the independent counsel because they contain the Park Blue House’s positions on the main charges in the ongoing trials of the former president, her friend Choi Soon-sil and Samsung scion Lee Jae-yong.

The spokesman said the documents include reports for senior secretariat meetings dating from June 11, 2014, until June 24, 2015, minister candidate profiles and various reports on pending issues. Woo Byung-woo was serving as civil affairs secretary when the documents were dated.

Among the documents was some critical information about the alleged abuse of power and bribery attributed to Park, her longtime friend Choi and the country’s largest business groups including Samsung. One of the documents was a report on the National Pension Service’s voting rights, the presidential spokesman said. Apparently, it discusses the Blue House’s plan to support a generational shift of power at Samsung Group.

Lee, the de facto leader of Samsung, is currently standing trial on charges of offering bribes to Park and Choi in return for political favors to solidify his control over the group. Samsung is accused of bribing Park in exchange for a crucial vote by the government-run National Pension Service to support a controversial merger of its two affiliates in 2015, a deal which cemented his control over the group. The independent counsel team which investigated the scandal and prosecuted Lee said Park ordered the pension fund to support the merger.

According to Blue House spokesman Park, the report on the National Pension Service’s voting right included relevant regulations, pros and cons, media reports and a guideline for the pension fund’s exercise of its voting rights. A hand-written memo and a copy of another memo as well as a printout of an email from a Blue House account were included in the report, he said. The spokesman, however, did not say who authored the memos and reports.

“It included a review of a plan to support the Samsung Group’s management succession,” Park said. “A handwritten memo cannot be seen as a confidential presidential record, so we decided to make public some contents.”

According to Park, the memo said, “Samsung management succession situation” and then an arrow was drawn, followed by, “Use it as an opportunity.”

“Find out what Samsung needs in the management succession situation,” Park quoted the memo as saying. “Give support for what needs to be supported and find a way to lead Samsung to contribute more to the national economy. The government is capable of exercising a significant influence in resolving Samsung’s pending issues.

“Responses for bills on economic democracy and support for easing regulations on the separation of banking and commerce were also in the memo,” Park said.

According to Park, the documents also covered a plan to reform the cultural and art community. A plan to actively mobilize conservative groups to back the administration was also found, Park said.

While the spokesman did not identify the authors of the documents he shared with the media, he showed a piece of paper that he claimed was a handwritten memo by then-senior secretary of civil affairs, the late Kim Young-han.

“We judged that the documents were related to the so-called Choi Soon-sil scandal,” Park said. “Independent counsel Park Young-soo’s team initially attempted to raid the office of the senior civil affairs secretary of the previous Blue House but was blocked. The independent counsel also tried to verify some documents with the Blue House through a local court but was rejected. Since the concerned documents were discovered this time, we will submit copies to the prosecution.”

A source at the Blue House said copies of some documents were sent to the special counsel on Friday.

The presidential spokesman also made clear that the copies to be offered to the independent counsel are not presidential records protected by the law. He said the original materials will be handed over to the Presidential Archives later in the day.

The Moon Blue House said its decision to make public some of the documents and to offer copies to the independent counsel is not illegal. The spokesman said there was no way to determine whether the documents found in the cabinet were presidential records supposed to be sealed in the archive or not, because the Park Blue House sealed the list of the presidential records sent to the archive.

After the Constitutional Court ended Park’s term in March, the Blue House started classifying records to be sent to the archive, designating many to be sealed for 30 years. Immediately after Moon took office, aides of the new president complained that the Park Blue House left essentially nothing.

“We concluded that the documents we found are presidential records, but not designated to be sealed in the archive because they were not marked as confidential,” Park said.

A Blue House official also said the presidential office already completed a legal review of the legitimacy of offering copies of some documents to the independent counsel and conducting the press briefing.