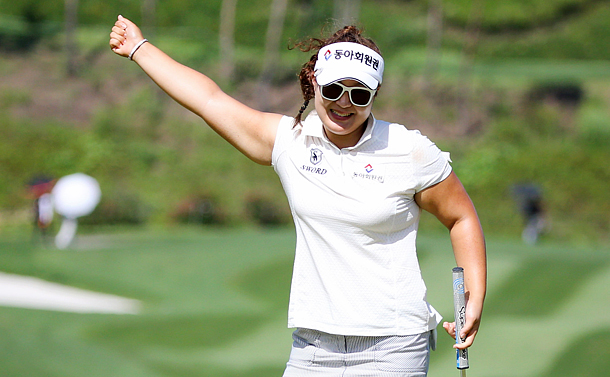 Park Shin-young celebrates after sinking a birdie putt on the 18th hole during the final round of the Caido Ladies Open with TaniCC at Seo Kyung Tani Country Club in Sacheon, South Gyeongsang on Sunday. Park shot a bogey-free round of 67 on the last day to win one shot ahead of An Na-rin and Seo Yeung-jung. [YONHAP]

It was a beyond impressive come-from-behind victory for Park, as she started tied for 16th after the first round and moved up to being tied for eighth after the second. During the final round, Park made another improvement, carding a bogey-free round of five under par.

Though Park made quite an improvement, not many expected her to be competing for a victory, as she was four shots behind the leader.

After the front nine, she was two shots behind the leader with two birdies. But with two back-to-back birdies on the 11th and 12th, Park quickly climbed up the leaderboard and tied for the lead while the others struggled with bogeys.

It all came down to Park’s performance on the par five 18th. Heading into the final hole, Park was tied for the lead with Seo Yeun-jung, who finished a group ahead of Park, at ten under par. A birdie was a must for Park to take the lead and after making a 20-foot putt, she finished the weekend at 11 under par.

Though there were groups behind Park, they all struggled to shoot low scores and failed to overcome the two-shot deficit.

An Na-rin, the leader prior to the third round, got close by making two consecutive birdies on the 16th and 17th, but after she hit her third shot short of the green and finished with a par, Park was declared the champion about an hour after she signed her scorecard.

With a winning purse of 100 million won ($88,533), Park has exceeded 100 million won in a single season for the first time and moved up to 21st on the 2017 KLPGA tour money list. Additionally, Park’s victory has given her another year on the KLPGA tour card for the next season.

Park made her KLPGA tour debut in the 2013 season through the 2012 KLPGA tour qualification and has been an unknown on the tour up until her victory this weekend. Throughout her KLPGA tour career, Park’s best finish was fourth place.

Park has had to go through qualifying school to earn her spot on the tour each year since her debut, except for the 2015 season. Golfers who fail to finish within the top 60 of the money rankings at the end of the season are required to go through a qualifying process to participate in the next season.

Kim Ji-hyun, who already won three tournaments this season and is a leader in the 2017 KLPGA tour money list, finished tied for 13th at six under par and failed to record another top ten finish for the fifth consecutive weekend.

The gallery got to watch both the men’s and women’s tournament this weekend, as the Seo Kyung Tani Country Club also hosted the fifth Caido Series of Jinju Savings Bank Caido Men’s Open with Black Cats.

On the men’s side, Kang Kyung-nam won the tournament at 18 under par, three shots ahead of Hwang Jae-min, runner-up.

This was Kang’s tenth KPGA victory and he took home the winning purse of 60 million won, moving him up to tenth on the 2017 Genesis Prize Money list.