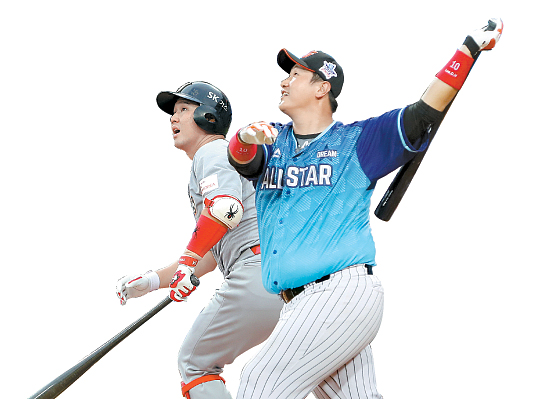 Choi Jeong of the SK Wyverns and Lee Dae-ho of the Lotte Giants each belted two home runs, as their Dream Team defeated the Nanum Team 13-8 at Daegu Samsung Lions Park in Daegu, some 300 kilometers southeast of Seoul.

Choi was named the All-Star Game MVP, earning 40 out of 53 votes from the media after going 2-for-3 with three RBIs, three runs scored and two walks.

He’s the first of the Wyverns to be so honored. This was Choi’s sixth All-Star appearance.

The Dream Team featured players from the Wyverns, the Giants, the Doosan Bears, the Samsung Lions and the KT Wiz. The Nanum squad had representatives from the Kia Tigers, the NC Dinos, the Nexen Heroes, the Hanwha Eagles and the LG Twins.

Fifteen Dream players made at least one plate appearance, and combined for 19 hits, including five home runs, off nine Nanum pitchers.

The Nanum Team scored all eight runs in the final three innings before their late rally came up short.

Choi and Lee started the game batting third and fourth, and they hit back-to-back jacks in two consecutive at-bats.

With two outs in the top of the first, Choi launched a solo shot off Nanum starter Yang Hyeon-jong. Lee then followed up with a solo shot of his own.

Then in the third, facing new pitcher Bae Young-soo, Choi blasted a two-run bomb to left. Lee then smacked his second solo home run of the game.

Choi is leading the KBO with 31 home runs in 82 games. Lee, who played for the Seattle Mariners last year, has 17 homers this season to tie for seventh.

The two led the Dream Team’s onslaught. Koo Ja-wook of the Lions also homered off Bae in the third inning, when the Dream ended up scoring five runs in total.

The Dream Team added three more runs in the fourth and another in the fifth to open up a 11-0 lead.

The Nanum Team got a run back in the bottom of the seventh, only to see the Dream Team score a run to lead 12-1.

In the bottom eighth, Choi Hyoung-woo of the Tigers, the leading MVP candidate as the league leader in key offensive categories, hit a three-run shot to make it 12-4.

After the Dream Team scored another run for a 13-4 lead, the Nanum Team scored three quick runs on an RBI double by Kim Sun-bin and a two-run home run by Na Sung-bum. Lee Hyung-jong’s solo blast cut the deficit to 13-8, but the Nanum Team couldn’t get any closer.

Following his team’s victory, Choi Jeong said he became conscious of his MVP chances after hitting his second home run.

“When I came back to the dugout after the second home run, the guys told me the MVP was mine to lose,” Choi said. “I was hoping to win it, but then when the other team starting rallying a little bit, I started to worry.”

Choi, who was the 2008 Korean Series MVP, said winning the All-Star honors felt just as good.

“It’s an honor to be the first player from our club to win this,” Choi added. “And I hope our ball club will become more popular across the nation after this.”

This was the final All-Star Game in the illustrious career of the Lions’ slugger Lee Seung-yuop.

The 40-year-old legend will retire after the end of this season, having spent 15 seasons with the Daegu-based Lions, his hometown club.