A revealing look at a beloved and mysterious writer

A revealing look at a beloved and mysterious writer 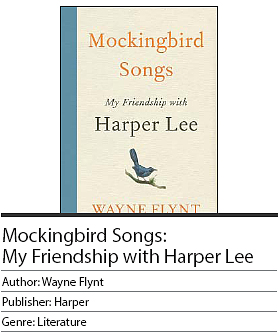 Nelle Harper Lee wrote a novel published in the early 1960s. Her next novel was published more than 50 years later. She had no use for email, Facebook and Twitter (which she considered as ways of invading someone’s privacy) and only used a cellphone to call people because she didn’t understand how to use it for anything else.

Given her disdain for modern communication tools and her slow, deliberate pace, it shouldn’t be surprising that the author of “To Kill a Mockingbird” built her friendship with Alabama historian Wayne Flynt over a period of years and maintained it with an exchange of long, detailed letters.

They sometimes commiserated over the declining popularity of letter writing due to the advent of email. Flynt’s “Mockingbird Songs” is a testament to their friendship and to the value of patient cultivation of friendship, loyalty and skilled letter writing.

She wrote to Wayne that “you are surely one of the era’s foremost practitioners of a moribund art,” saying his letters “should be kept forever.”

But that friendship was slow in developing. When he first encountered her at a book event and asked her to sign a copy of her Pulitzer-winning book, Lee coolly replied, “I only sign for children.” Flynt writes “that was our first, not very promising, exchange.”

In later years, Flynt got to know Lee’s sisters and began to become more acquainted with Lee, who went by her first name of Nelle. Gradually, Flynt and his wife, Dartie, developed a friendship with the author after a newspaper column he wrote about the Lee family - and his admiration for “To Kill a Mockingbird” - caught her attention.

After their first exchange of letters, Flynt was out of touch with her for a dozen years. He let her know after he renewed their communications that one of his granddaughters was named Harper in her honor - and that delighted the author.

Their friendship grew as they began corresponding regularly and found many common interests, especially Alabama history and literature. Lee adopted Flynt’s family as her own. Some interesting highlights from the book: Flynt maintains she was very aware of the planned publication of “Go Set a Watchman” and was enthusiastic about it.

Some critics had questioned whether Lee, already in frail health, had given her informed consent for the publication of her second book. The image of her as cool and aloof was far from the truth. “She was in fact empathetic, warm, nonjudgmental and a wonderful conversationalist,” Flynt wrote.

She had a stroke in 2007 and moved to an assisted-living facility in Monroeville, her hometown. Her letters grew shorter and more infrequent. Flynt and his wife kept in close contact, however, writing her letters and visiting.

Flynt spoke of the accomplishment of Lee’s signature book, “To Kill a Mockingbird,” at the presentation of a lifetime achievement award, and again at her eulogy. “One of the fine moments of irony is that a novel written by a woman from Monroeville has become the primary literary instrument worldwide for teaching values of racial justice and tolerance for people different from ourselves,” he said. He had agreed not to write about Lee while she was still alive. She died in 2016.

Flynt, a professor emeritus of history at Auburn University, and his wife were there for Lee at three critical times of her life, Flynt wrote: when her sister Louise slipped into dementia, when Nelle suffered a stroke and when she was forced to give up her second home in New York City and move back to Monroeville, which she had left 65 years earlier. As Flynt put it: “Perhaps we three met in the twilight of our lives and just needed each other.”