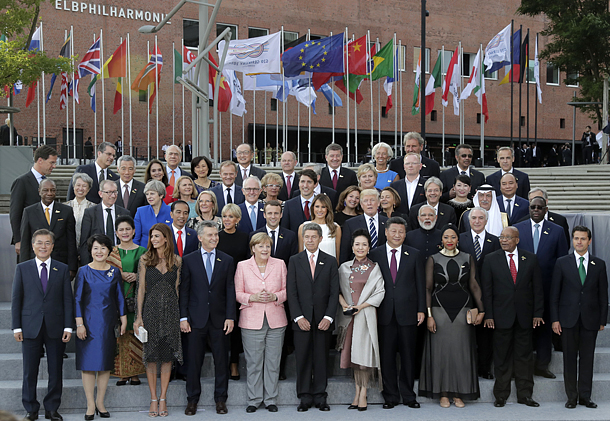 The Group of 20 participants and their spouses in front of the Elbphilharmonie concert hall on the first day of the G-20 summit in Hamburg, Germany, on July 7. [AP/YONHAP]

The Group of 20 summit began in 2008 when U.S. and European leaders shared a sense of crisis after the global financial crisis of 2007-08. The following year, it was agreed that the G-20 summit would be used as the highest forum for international economic cooperation and would be held annually.

Since then, it has prevented the global economy from falling into another crisis like the Great Depression of the 1930s and has contributed to improving the existing international financial system and global governance through close policy coordination.

Ironically, the wills of the G-20 leaders diminished after peaking at the G-20 in Seoul in 2010, and just like the old G-7, the G-20 became a regular leaders’ meeting that is not often followed by any specific action plan but has become adept at presenting empty, abstract statements.

The leaders attending the summit seem more interested in bilateral or multilateral meetings than the G-20 meeting itself.

Moreover, as expected, the leaders at the G-20 summit in Hamburg, Germany, experienced challenges in adopting a joint statement due to U.S. President Donald Trump’s “America First” stance.

G-20(-1) means what is often referred to as G-0, or the absence of global leadership. In this situation, we cannot rule out the possibility that the world will fall into the Kindleberger Trap and face another catastrophe like the Great Depression or World War II.

Of course, the world doesn’t need to worry if emerging China fills the vacancy of global leadership that the United States has given up and leads the existing liberal international order.

However, China has yet to prove it has the capacity to play the role of a responsible global leader. So all players need to work on devising plans to avoid the worst-case scenario. Of course, Korea is not in a situation to fill the global leadership position.

But there are certainly roles that Korea can play. First of all, as a member of the OECD and G-20, Korea can serve as a bridge between the developed world and developing and emerging economies, especially offering help to developing countries outside the G-20.

Such moves will bring a major change in international money flow, especially affecting many emerging economies with large debts in U.S. dollars.

It is regrettable that this problem was not discussed in depth at the G-20 summit and that Korea did not take the initiative to set it as a major agenda. Emerging economies have major economic and finance industries and are highly integrated with the economies of developed countries, so when they are in trouble, it will inevitably affect us all.

Therefore, the discussion is necessary for the developed economies of the world.

Domestically, Korea needs to prepare for various trade protectionist measures of the United States. Recently, the U.S. government informed Korea of the need for adjusting the Korea-U.S. FTA. It is necessary to operate a temporary task force as well as reinforcing trade-related teams in the government. If Korea actively responds with convincing reasoning and analysis, renegotiation is not necessarily disadvantageous for our side.

The growing worldwide waves of trade protectionism and international trade will surely continue. Therefore, basic competitiveness of products and services are more important.

In addition, active trade diplomacy and international cooperation should focus primarily on removing factors that may hinder competitiveness of Korean products and services.

Reforms to improve flexibility in the labor market are also important. Moreover, we need to continuously pursue the strengthening of law and order and make improvement to the economic and social systems to enhance overall structural efficiency of the Korean economy. There is no need to emphasize the need for educational reform again.