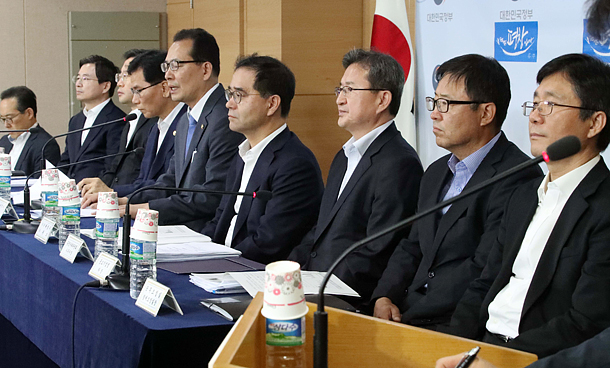 First Vice Minister of Strategy and Finance Ko Hyoung-kwon, fifth from left, announces plans to help small entrepreneurs that are likely to be affected by the hike in the minimum wage at the Central Government Complex in Seoul on Sunday. [YONHAP]

National labor representatives and companies finally agreed on Saturday to set next year’s minimum wage at 7,530 won ($6.64) per hour, up 16.4 percent from last year.

This is the first time since 2007 that the minimum wage rose by double digits - and the hike is the biggest since 2001. President Moon Jae-in has promised to raise the wage to 10,000 won per hour by 2020. To do that, it must increase 15.7 percent every year until then. The Minimum Wage Commission came to an agreement one day before the legal deadline for the change to go into effect for next year.

The business community, however, raised concerns that this will hurt small companies, especially the self-employed.

“The minimum wage that was decided today isn’t biased but is a fair decision that will be supported by both the labor and corporate sectors,” said Uh Soo-bong, Chairman of the Minimum Wage Commission. “We came to an agreement through thorough discussions on how to help society move sustainably ahead.” 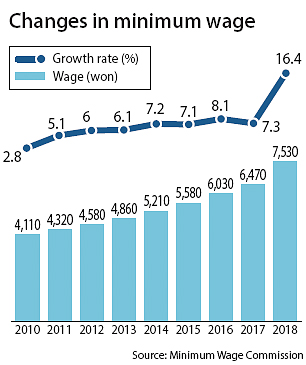 The commission started working on setting the minimum wage in March, upon the request of the Ministry of Employment and Labor. But the actual discussions started in June and the commission could not come to an agreement.

After several meetings, the labor union proposed raising the minimum wage to 7,530 won per hour and the corporate sector proposed increasing it to 7,300 won per hour. All 27 members of the commission attended Saturday’s meeting and 15 members voted in favor of the labor sector’s proposal.

The 27 members comprise 9 representatives each from the corporate, labor and public sectors.

In Korea, 17.4 percent of the workforce is paid the minimum wage, which is high compared to other developed countries. In the Netherlands only 6.2 percent are on minimum wage and in neighboring Japan, the figure is only 7.4 percent.

But one of the biggest concerns is the fate of small businesses. According to Statistics Korea, 51.8 percent of self-employed individuals in the country earn less than 46 million won per year. Their monthly operating profit is only 1.87 million won. But starting next year, minimum wage earners will receive 1.57 million won each month when working 40 hours a week. This suggests that part-time workers could make more than the self-employed.

“The labor costs need to go up after companies’ sales and operating profits are boosted following economic recovery,” said Oh Dong-yoon, an economics professor at Donga University. “Other problems will worsen if the wage is raised, even though businesspeople can’t pay that amount.”

Business associations released statements one after another on Sunday criticizing the commission’s decision as harmful to small businesses.

“The minimum wage went up the most even though small enterprises and mid-size companies are asking the government to help them survive in a market where the economic conditions are not good,” said Korea Employer’s Federation (KEF) in a press release on Sunday.

The federation added that the decision will have a negative impact on job creation as well.

“As 42 percent of small and mid-size companies are unable to pay back interest they owe from operating profits and 27 percent of small entrepreneurs’ operating profits are below 1 million won a month,” said the KEF, “the new minimum wage will hurt already struggling small businesses and will have a negative impact on the job market. The Minimum Wage Commission’s public and labor sectors should be responsible for all the problems coming from the hike in the minimum wage.”

“The new minimum wage didn’t consider the ability of small and mid-size companies to do so at all,” said the Korea Federation of SMEs. “We believe companies will have to face paying 15.2 trillion won more next year due to the new minimum wage and many entrepreneurs might become criminals for not being able to pay wages they owe to their employees.”

According to the Korea Foodservice Industry Research Institute last week, some 280,000 people working in restaurants and related sectors will be laid off if the minimum wage reaches 10,000 won per hour by 2020.

“There can be many variables but we expect that restaurant businesses will not be able to profit due to the financial burden of paying their employees,” said Seo Yong-hee, a researcher at the Korea Foodservice Industry Research Institute. “Business owners will cut down on the number of employees and might decide to close their stores.”

A labor union of part-time workers called Alba Nojo, which supported raising the wage to 10,000 won next year, said it is not satisfied with the commission’s decision but that the increase will at least help struggling workers catch their breath.

The ruling Minjoo Party and opposition Bareun Party released statements on Sunday saying they welcome the commission’s decision to raise the minimum wage. The opposition Liberty Korea Party, on the other hand, criticized the move and said it is pushing forward with the 10,000 won policy too rapidly, without coming up with ways to deal with the possible negative side effects.

The Ministry of Strategy and Finance held a meeting on Sunday and announced its plans to help small businesses that are likely to be affected. The ministry said it will spend some 3 trillion won to support companies with fewer than 30 employees so that they can afford the increased minimum wage.

“We came up with plans to reduce about 4 trillion won worth of financial burden that small businesses might face,” said Kang Ki-ryong, a director at the ministry.

The government said it will reduce credit card service fees for small businesses and give them more tax benefits.