Creating a thriving, culture-focused Korea : With the election of a new president, culture industry looks to grow

Creating a thriving, culture-focused Korea : With the election of a new president, culture industry looks to grow 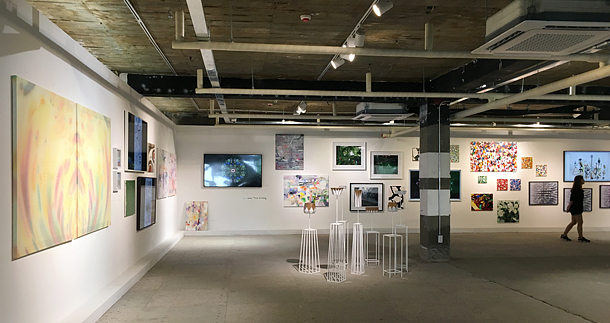 Breaking the art market’s high barrier of entry is not easy, especially for young artists who lack financial stability. To support these artists, the second Union Art Fair took place for ten days in Insa-dong, central Seoul, from June 23rd to July 2nd.

More than 160 young artists submitted a total of around 1,000 artworks - ranging from fine arts, sculptures to installations - for display and for sale at the fair. With 60 million won of ($53,500) financial support from the Korea Arts Management Service, an organization affiliated with the Ministry of Culture, Sports and Tourism (MCST), young struggling artists opened up a marketplace of their own, which successfully attracted visitors from diverse backgrounds despite heavy showers that hit the nation during the fair.

“The art industry was not in good shape for 10 years, and therefore, those young artists entered the market during those years were pushed to the corner without getting [an opportunity] to hold an exhibition,” said 45-year-old Choi Du-su, who helped organize the event. “So [I] wanted to create an event that artists could enjoy and coexist while being available to the public.” 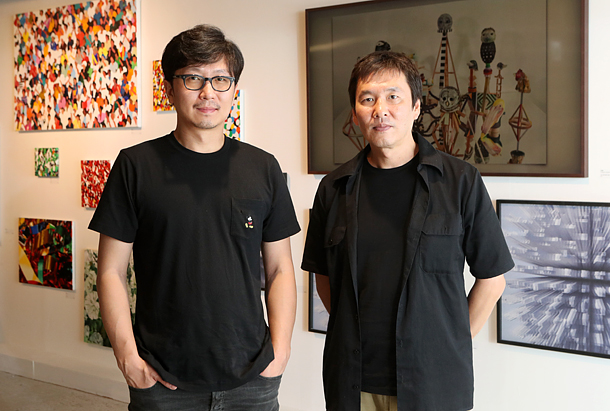 Lee Wan, left, and Choi Du-su organized the Union Art Fair. The pair have been working together over the last decade to come up with ways to help artists pave their way in the industry. [CHOI JEONG-DONG]

Choi continued, “Once provided a place, young people these days are able to form a network among themselves. I wish to make a ‘public playground,’ under the name of art. Art doesn’t necessarily always need to be shaped in physical substance like paintings or sculptures. It’s rather something that [everybody] can enjoy together. Small dots like us need to be gathered and connected to make a real content.”

Next year, the Union Art Fair may become a larger festival with a celebratory atmosphere and performances.

“Next time, I hope to open a real festival, where there’s a performance, party and fair under the title ‘Art Festa,’” said 38-year-old Lee Wan, who was also behind organizing Union Art Fair. “There is not an artist-centered festival in Korea. Meeting with artists and listening to their explanations and even getting their autographs could make people want to come [to the festival] again, creating a virtuous cycle.”

Since the launch of the new Moon Jae-in administration, MCST has promised to support artistic activities. The newly appointed culture minister Do Jong-hwan vowed for the promotion of cultural activities, including plays, movies and publications, which had been previously shunned. Despite the efforts, however, the big picture on how the government will support content creation, which is often regarded as the basic component of culture, is yet to be announced.

A group of cultural experts proposed possible ways to develop the ecosystem of cultural contents and securing competitiveness as part of “Reset Korea” project from the JoongAng Ilbo and JTBC, affiliates of the Korea JoongAng Daily. 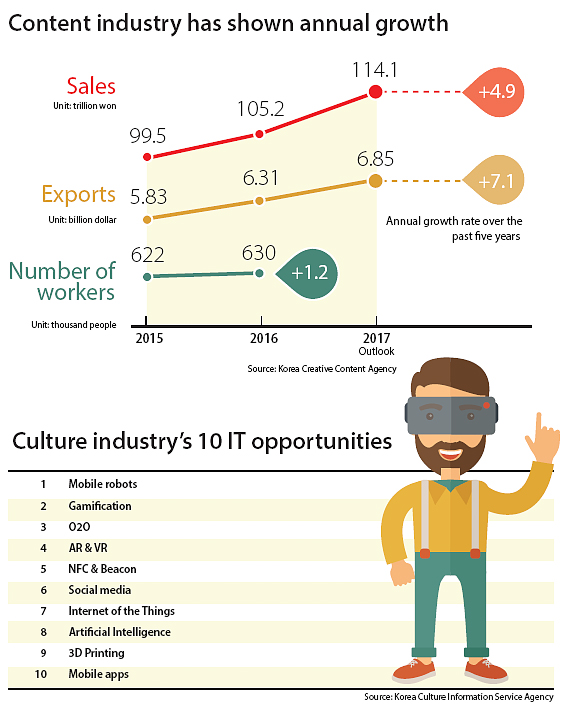 Part of the national agenda

Today’s culture [industry] leads to a [larger] industry, which directly relates to job creation. Statistics over the last five years show that content industries grew by 4.9 percent, which is twice the size of Korea’s 2.8 percent economic growth. While the size of trade exports shrank, content exports jumped by 7.1 percent. Despite the performance, however, many say that there are not enough supportive policies to further its growth.

“The content industry only takes up 0.4 percent of the entire government budget,” said the former minister of MCST Kim Jong-min. Kim explained that it “wouldn’t be right to neglect culture” that could secure more jobs and raise profitability, and argued that fostering the content industry should be included as one of the key national agendas.

Cultural experts also stressed the importance of recognizing the need to progress cultural contents, and to possibly recognize value in something that no longer seems valuable. In the digital era, for example, things that went out of fashion could also hold commercial value.

Publish on Demand (POD) by French publishing house Les Presses Universitaires de France (PUF) is an example. PUF allows customers to browse a list of available books on a database and place their order. They can get their books - even those that went out of print - printed before their eyes in less than 20 minutes. The publishing company had to shut down amid the advance of online bookstores and decreased demand for hardcover university textbooks, but managed to survive through the digital information network. Korea’s Kyobo Book is similarly providing POD service for publications that went out of stock.

“We have reached the era in which people design and come up with ideas while labor is passed on to machines, like the 3D printer,” said book editor Jang Eun-su. “The goal of culture policies should head in a direction that promotes creative individuals to gather and form a network. Just like the film industry, in which experts of different fields flock and scatter on a project basis, high quality jobs can be created when a network based on regions, fields or genres is formed.”

An idea does not suddenly fall from the sky. New content is usually made based on modifying and processing existing content. And a consumer can be a creator and a producer in this cultural Do It Yourself (DIY) era. This means there needs to be plenty of existing contents for people to collect, publicize and share to come up with something new.

A good example of a platform that promotes recreating content is Europeana, the EU’s digital platform for cultural heritage. Europena gives people access to content from some 2,500 heritage institutions like museums, art museums and libraries. There are more than 53 million documents, pictures or videos, which people use as basis to recreate something new.

Korea also provides similar services like Korean Culture Portal and Gongu Madang, each organized by Korea Culture Information Service Agency and Korea Copyright Commission. But most of the materials provided in these services are limited, and are likely to take some time before they can develop into experiential platform involving information technologies like AI.

“Culture portal sites run by the Korean government are not fun, and therefore, are under-utilized,” said Park Sin-ui, professor from Kyung Hee University. “Old museums collected valuable items, but digital museums need to develop into an archive that collects people’s memories and stories.”

Just like the production of goods that are becoming more individualized based on an individual’s taste, culture is taking similar steps. One of the most well-received cultural events in the first part of this year was the Seoul International Book Fair, held last month. Small-sized independent publishing companies with strong personalities from around the world were invited to the fair, which attracted around 200,000 people.

“Last year’s ‘Unlimited Edition ? Seoul Art Book Fair,’ in which small-scale and independent publishing houses gathered, thrived so much that it made it difficult for visitors to pass through,” said Park Sam-cheol from Seoul Design. “Customized cultural content that [targets a small] group of people with similar values [and interests] will garner popularity.”

Cultural heritage, though it may sound old-fashioned, has a high possibility to be industrialized in the digital era. A social enterprise named Culture and Road received attention by introducing a course that explores the Han River. The organization is also offering programs that allow people to explore the natural and cultural heritage of Mt. Seorak.

“Cultural heritage has its own story. Though it doesn’t yet have strong roots, there is a great potential for cultural heritage to become industrialized,” said Lee Dong-beom, CEO of Culture and Road.

Cultural experts have expressed a similar view. “Different types of contents need to be generated in order to improve customer satisfaction and to create more jobs,” said Ahn Ho-sang, CEO of the National Theater of Korea. “Cultural policies need to be concentrated on nurturing specialized experts based on specific fields or regions.”

Professor Park Sin-ui similarly said, “Airbnb provides [customers] accommodations without [making them] go through real estate. [Jobs like] planner, curator and programmer will be under the limelight in the near future.”

Trafalgar Square, which commemorates the Battle of Trafalgar, a British naval victory in the Napoleonic Wars with France and Spain in 1805, represents England’s history and present. Around the square is Buckingham Palace, Piccadilly Theatre, the British Museum, Covent Garden, London Eye and the National Portrait Gallery, closely connecting politics, economy, culture, tourism and leisure activities.

When Park Sam-cheol thinks of London’s Trafalgar Square, he compares it to Gwanghwamun Square.

“[Gwangwhamun Square] can be used as a network information center where experts and citizens cooperate to help young people start their business,” said Kim Jong-min.