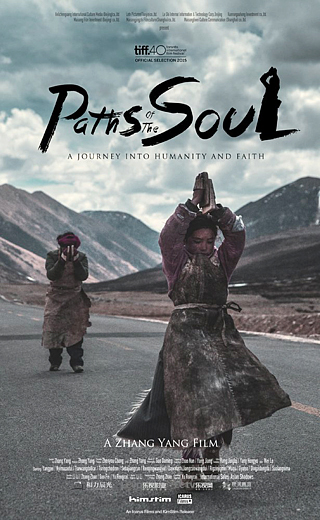 A documentary has started a quiet rebellion at China’s box office. “Paths of the Soul” is a movie about the 2,500-kilometer (1553 miles) pilgrimage of 11 villagers in East Tibet across the Tea Horse Road by Zhang Yang, one of China’s Sixth Generation directors. When it first opened in June 20, it was showing on only 0.9 percent of the screens — but thanks to positive reviews from viewers, it is now on 5.9 percent of the screens. The movie has made 92.14 million yuan ($13.58 million) at the box office and continues to be screened.

The film depicts the pilgrimage of the Tibetan Buddhists. They lay flat, face-down on the ground every three steps as they travel to Lhasa and Kang Rinpoche. They rely on yak leather aprons and wear wooden boards on their hands to help them make full bows. An expecting mother, a nine-year-old girl, an elderly man and a butcher set out on the journey together, each for their own reason. They experience snowstorms, cherry blossoms and falling rocks. A baby is born on the road, they share food with other pilgrims and make money by working at a construction site. The elderly man passes away in Kang Rinpoche.

In Tibet, keeping calm in the face of danger is a virtue. In the film, a Jeep crashes into a pilgrim’s cultivator, which was pulling their cart. The driver of the Jeep is transporting a patient suffering from altitude sickness to the emergency room. The pilgrims let them go without getting upset or demanding compensation. They abandon the cultivator, and the men push the cart while the women continue to take full bows. The men leave the cart, return and continue to bow every three steps. The pilgrimage becomes longer and more arduous, but they hold no grudge. The power of remaining calm means having no arrogance, joy or grief.

In March 1959, the 14th Dalai Lama declared the independence of Tibet and left Lhasa to seek asylum. That year, 12,000 Tibetan anti-Chinese protestors were suppressed by China near the Potala Palace. The Tibetan government in exile estimates that 170,000 Tibetans were killed during the Cultural Revolution. At the 1989 Nobel Peace Prize ceremony, the Dalai Lama said, “Because violence can only breed more violence and suffering, our struggle must remain nonviolent and free of hatred.”

Nobel Peace Prize winner Liu Xiaobo passed away on July 13. In his final statement in 2009, he spoke of reconciliation. “I have no enemies and no hatred… Hatred can rot away at a person’s intelligence and conscience. Enemy mentality will poison the spirit of a nation, incite cruel mortal struggles, destroy a society’s tolerance and humanity, and hinder a nation’s progress toward freedom and democracy.”