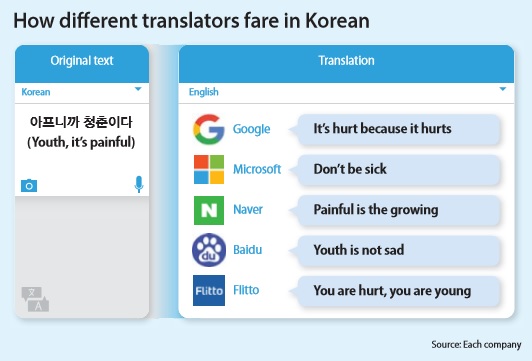 Although machine translation has made significant progress in recent years, the quality of translation still varies depending on the language.

Google’s translation service, the most widely used in the world, does pretty well with languages of similar structure like English, French, German and Spanish.

But languages like Arabic, Chinese and Korean, with structures different from Western European languages, are considered more difficult to translate.

Korean in particular has various prefixes and suffixes that can significantly change the meaning of a word. One or two Korean characters can mean the difference between “I am going to school” and “I guess I have to go to school.”

“There are various sentence structures and sometimes predicate parts that are omitted in the Korean language,” said Kim Young-gil, a senior researcher at the Electronics and Telecommunications Research Institute, a government-funded think tank. “The Korean language is a harder language to translate than English.”

Some users get around the machine’s limitations by first translating to an intermediary language. For example, some services provide better results when Korean is first translated to Japanese and then to English instead of directly. It works better vice versa as well.

Simon Lee, founder of the Korean start-up behind Flitto, an app that crowdsources translations, said the hardest part for machines when translating languages is when people make errors like finishing a sentence without a period, making typos or forgetting spaces, especially crucial in Asian languages. When Lee launched his app, he promoted it by translating Korean celebrities’ social media posts, which are notorious for being terribly written.

Another obstacle for machines is context. In Chinese, two characters can be attached to each other to create one word, and machines have a hard time figuring out whether the characters are one word or two.