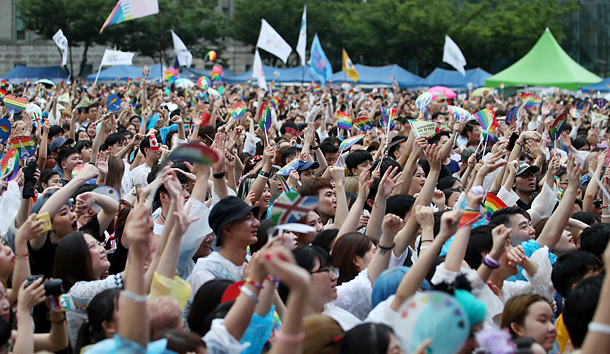 Thousands gather and chant in support of the LGBT community in central Seoul on Saturday, as part of the annual Pride parade, which has been held in the city since 2000. [YONHAP]

Thousands marched in support of the lesbian, gay, bisexual, transgender and queer community in central Seoul on Saturday, as part of the annual Pride parade held in the city since 2000.

“LGBT is love!” some participants chanted through the rain as they paraded under rainbow color umbrellas from Seoul Plaza to the Bank of Korea.

The organizers of the festival said some 85,000 people took part, while police estimated attendance to be around 9,000.

The Korea Queer Culture Festival has grown from some 50 people in 2000 to some 50,000 in 2015, according to its organizers. First hosted in Daehak-ro, central Seoul, since 2015 it has been hosted at Seoul Plaza.

Hosted this year under the slogan “There is no later, now is the time for change,” the festival held its opening ceremony at the plaza on Friday, featuring singers and songwriters such as Cha Sevin and Shin Seung-eun.

Over 100 booths were installed at the plaza over the weekend, run by organizations including at least 10 embassies and the National Human Rights Commission of Korea, which participated in the festival for the first time.

Ambassadors and diplomats of these embassies, including the U.S., Canadian and German embassies, also participated in the opening ceremony on Friday, holding up a banner that read “Diplomats for Equality” on a stage installed at Seoul Plaza.

Diplomats for Equality is a movement of diplomats worldwide to support the LGBT community.

“Celebrating diversity and promoting equal rights for everyone - this evening at the opening ceremony of the Korean Queer Culture Festival!” the German Embassy posted on its Facebook account on Friday.

On Thursday, the U.S. Embassy hung a rainbow flag outside its building.

“U.S. Embassy Seoul looks forward to supporting, and participating in, this year’s Korea Queer Culture Festival, as we have in years past,” the embassy said in its press release. “The embassy is proud to display the rainbow ‘Pride’ flag in a show of solidarity with human-rights and civil-society organizations in the Republic of Korea and around the world that promote the fundamental rights of LGBTI persons.”

A unisex public bathroom was installed at Seoul Plaza during the festival.

“Though the weather isn’t great, we’re happy that we can all get together to celebrate who we are,” said a 25-year-old woman surnamed Lee, participating in the parade on Saturday with her partner, a 24-year-old surnamed Jeong. “Though some are holding rallies against us, we are happy to proudly show them who we are.”

Justice Party Chairperson Lee Jeong-mi also participated in the parade on Saturday, the first time the chairperson of a political party took part in the festival, according to the Justice Party.

“The LGBT community faces all kinds of violence and discrimination in this society,” Lee said. “We need to help them escape such violence, as an act of true love and peace. I will make Korea the second country in Asia to legalize marriage for same-sex couples.”

Taiwan’s top court moved to legalize marriage for same-sex couples within the next two years.

Christian and conservative organizations held rallies across the street from Seoul Plaza, near the entrance to Deoksu Palace.

Holding signs that read, “No same-sex marriage” and “Beware of AIDS,” they paraded from the palace entrance to Gwanghwamun Square. Their parade route was separated by police from that of the Korea Queer Culture Festival and there was no physical conflict between the two groups. There were some 6,100 officers dispatched in the area.