With 3-1 win against Poland, Korea atop Grand Prix group

With 3-1 win against Poland, Korea atop Grand Prix group 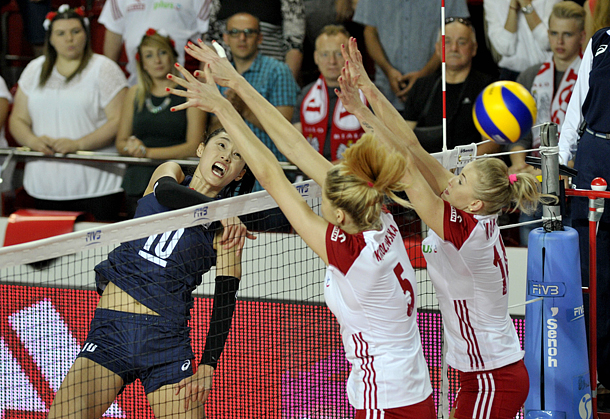 Kim Yeon-koung, in navy, swings through a double block during the 2017 FIVB Volleyball Grand Prix match against Poland at Ostrowiec Swietokrzyski, Poland on Sunday. For the first time in six years, the Korean national volleyball team defeated Poland and is now ranked first in Group 2. [JOONGANG PHOTO]

The Korean national volleyball team concluded their second week in the 2017 FIVB Volleyball World Grand Prix with a 3-1 victory over Poland in Ostrowiec Swietokrzyski, Poland on Sunday. Korea is now ranked first in Group 2.

The team, led by head coach Hong Sung-jin, got off to a slow start, losing the first set. In the second set, Korea was losing 19-12, but Kim Hee-jin started off Korea’s comeback with two service aces. Then, Hwang Min-kyung, who substituted in, showed stable defense and both Kim Yeon-koung and Yang Hyo-jin started to bring back their A-game. With that, Korea quickly took the lead and Kim Yeon-koung scored the last two points to come out of the second set on top.

After winning the third set, Korea continued their run in the fourth. With the score at 24-20 and only one point left to win the set, Korea dropped four consecutive points to Poland, but Kim Yeon-koung saved the day once again and finished the game by scoring two consecutive points.

“I’m glad we won against Poland, who has not yet lost a match,” Kim said.

Kim Yeon-koung scored a total of 26 points, and was the top scorer on the court. Kim Yeon-koung has once again proved her ability as the world’s best striker, as she recorded a total of 102 points throughout the two weeks of the FIVB Volleyball Grand Prix Group 2 matches. Kim Hee-jin also had another strong performance, scoring 20 points including four blocks and two service aces. During the game against Peru on Saturday, Kim Hee-jin had another great game, and was behind four service aces.

Despite missing two players due to injuries before the event began, Korea has been playing well above expectations. This was the first time Korea has defeated Poland since 2011 and with the victory, Korea has improved their record to five wins and one loss ? which came at the hands of Bulgaria during the first week.

The Korean national volleyball team will be returning to Korea today to prepare for the last three matches of the tournament, which will be played in Seoul. Starting from Friday to Sunday, Korea will be playing against Poland, Columbia and Kazakhstan in Suwon. The top three teams will advance to the final in the Czech Republic on July 29 and 30.