With the All-Star game finished, the KBO enters its 2nd half - here’s the roundup

With the All-Star game finished, the KBO enters its 2nd half - here’s the roundup 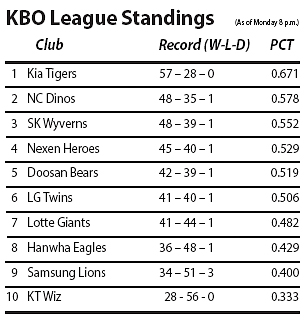 With the completion of the All-Star game, the Korea Baseball Organization (KBO) teams are starting the second half of their season. While the Kia Tigers have dominated the first half, four teams that played below expectation are looking to bounce back, as their main players will be returning to them.

The Doosan Bears, who were hoping to win both the regular season and the playoff for the second consecutive time, finished the first half in fifth. They lost their foreign pitcher, Michael Bowden, in June. Right before the All-Star break, the Bears won five of their seven games, correlating with the time Bowden returned from an injury. That said, starting this week, the Bears will finally have their four starting pitchers who led the team to both playoff and regular season victories in the second half of the season.

Throughout the first half of the season, the LG Twins have shown an imbalance between their batters and pitchers. On July 9, David Huff got injured and is expected to be out for about a month. They’ve also lost their other foreign batter, Luis Jimenez, due to an ankle injury.

Despite this, the Twins have held on at sixth. While they lost their ace players, they’ve strengthened their younger players by giving them more opportunities to play and they are expected to get stronger still once they get all their starting players back from injuries.

The Lotte Giants have shown inconsistency throughout the first half of the season, where the performance of Lee Dae-ho affected them heavily. Since they are still shaky in their bullpen, it is likely the Giants will rely on their foreign pitchers. After the Giants released Nick Additon, they signed with Josh Lindblom, the Giants’ foreign ace pitcher.

Finally, the Hanwha Eagles are looking to bounce back with the return of their foreign pitcher, Carlos Villanueva. Villanueva has already made his appearance in the KBO on Wednesday as a relief pitcher, but this week, he will make his return as a starting pitcher. 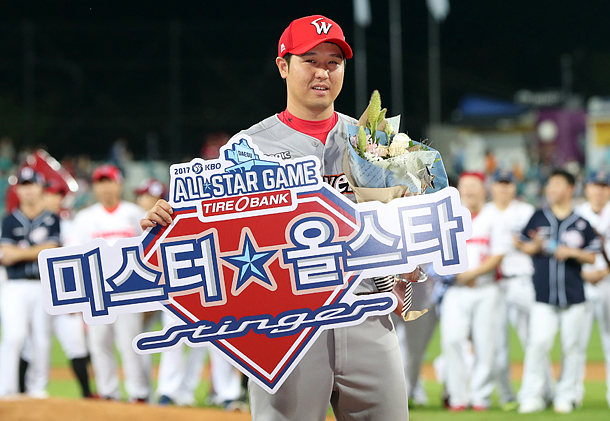 Choi Jeong of the SK Wyverns was selected as “Mr. All-Star,” the MVP of the All-Star game on Saturday, receiving 40 out of 53 votes while playing for the All-Star Dream Team.

Choi, who played as the Dream Team’s third batter and third baseman, had two hits and scored three runs. Choi hit his first home run during the first, when he hit Yang Hyun-jong of the Kia Tigers’ 131 kilometer per hour (81.4 mph) fastball over the center left fence. Then in the beginning of the third, Choi hit a two-run home run against Bae Young-soo of the Hanwha Eagles’ forkball, pitched at 121 kilometers per hour.

Choi’s All-Star MVP award joins his MVP award at the 2008 Korean Series. Choi’s award on Saturday represents more than personal achievement, since he became the first player in the Wyverns’ history to win the MVP award at the All-Star game. Once Choi wins the 2017 KBO regular season MVP, he will achieve a Triple Crown.

Aside from Choi’s performance during the All-Star game, he had quite a season during the first half of the KBO. Choi has been leading the KBO with 31 home runs and a batting average of 0.299. Though the 2017 season is not yet over, Choi became the first player in Wyverns history to hit more than 30 home runs in a single season.

Last year, Choi also won the category with Eric Thams of the former NC Dinos at 40, but looking at his home run pace this season, it is very likely he will exceed that number, and perhaps even Lee Seung-yuop’s single season record of 56 in 2003.