A little bit of give and take

A little bit of give and take 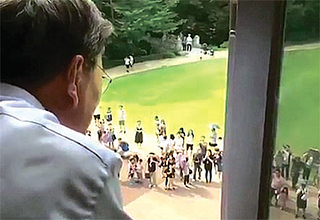 In Moon Jae-in’s Blue House, every week starts with a senior staff meeting at 2 p.m. on Monday. “The president made the decision because a Monday morning meeting would take away rest time on Sunday,” a senior official said. “Although we are still going to work around lunchtime on Sunday, it will soon become an established practice to take Sunday off.”

“A few times, I dozed off while having a one-on-one conversation,” Moon once recalled. During his first year of service at the Blue House, he gained 10 kilograms (20 pounds), and his blood pressure soared. Moon’s decision to start the week with a Monday afternoon meeting was made out of consideration for the heavy workload of his aides.

In the two months since he has taken office, Moon’s approval rating has been over 80 percent, partly thanks to his signature considerateness based on trial and error and leadership in communication. He moved the presidential office to the secretariat building to maintain the best communication channels. Senior secretaries, when necessary, visit Moon at his office on the third floor to have impromptu discussions, and sometimes, they manage to change the president’s opinion.

When Yoon Young-chan, the senior secretary for public affairs, did not answer a phone call in his room, Moon even stopped in a meeting hosted by Im Jong-seok, the chief of staff, to find him in person. Sometimes, Moon opens the window of his office, waves at the tourists in the Blue House and tells them, “Have a nice time!” There was concern that he would be controlled by his aides from lack of will, but that has clearly been wrong.

In the past, aides had to go by car to visit the president from their office building to the presidential building located about 500 meters (0.3 miles) away. Such an anachronism no longer exists. On the day of the Sewol ferry’s sinking on April 16, 2014, the head of the national security office had to deliver situation reports to President Park Geun-hye’s residence and her confidantes in the presidential office at the same time because he did not know where she was. Such a farce will never be repeated.

Moon’s exceptionally high approval ratings didn’t come for free. He is a natural-born man of principle. But he has begun making compromises recently, and that is an important change. After the Democratic Party’s chairwoman, Choo Mi-ae, made a verbal attack on the People’s Party and paralyzed the legislature, his supplementary budget bill was in jeopardy, but Moon managed to resolve the situation by having his chief of staff deliver an apology to the People’s Party on Choo’s behalf. This is a symbolic moment. It was a remarkable shift in his way of thinking, that he would value real-life politics to serve the people more than his own principles.

It was a fresh decision for Moon to accept a recommendation that he seek help from Franklin Graham, a conservative Christian leader who has influence over U.S. President Donald Trump, before the Korea-U.S. summit, despite protests from liberal insiders. Rev. Kim Jang-hwan, who persuaded Reverend Graham, said he actually voted for Moon’s conservative rival in the election but helped the president for the sake of the country. When it comes to national interests, it is nothing surprising for conservatives and liberals to unite.

“[Moon] used to be so inflexible that I felt suffocated, but these days, he has become flexible,” Yoo Ihn-tae, a former lawmaker, joked in a recent interview. “In some ways, he has become a little bit corrupt from the past.” Moon must not refuse to become more “corrupt” to be more flexible. For him to run the country with a party that does not possess a large enough majority in the legislature to pass laws on their own, cooperating and compromising with opposition parties is his destiny.

Appointments also need some flexibility. When he was the senior civil affairs secretary under Roh, Moon led an initiative to appoint Lee Yong-sup as the head of the National Tax Service even though Lee had no ties to the ruling circle.

And despite strong internal resistance, Moon also appointed lawyer Yang In-seok, who served as an assistant independent counsel in a lobbying scandal, as the senior secretary for audits and inspection. He pushed forward the appointment insisting that a person who has nothing to do with the president-elect’s network and his ideological stance should be hired for the post.

Moon also appointed Lee Suk-tae, a lawyer known for his strong sense of integrity, as the secretary in charge of public servants’ discipline. Lee did not even inform Moon in advance about the outcomes of the candidate vetting process when he was performing the job.

Now, President Moon must let go of the stubborn idea that he will use only his people for top posts and the pride that he is always right. The screening process of recent appointments was flawed because Moon insisted on his own people. He must not forget the way his predecessor hurriedly left the Blue House, leaving behind important evidence to prove charges against her inside a cabinet because officials were engaged in a power struggle.

For Moon to become a successful president, he must never lose his original heart but also allow many other things inside. A more flexible president will go very far and comfort the public further.