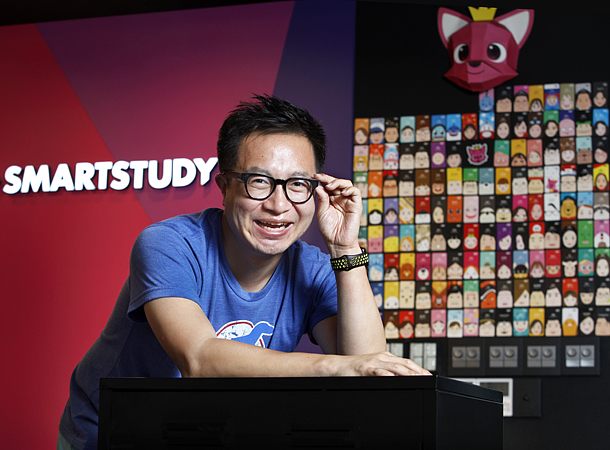 In Korea, many kids and parents associate Pinkfong, a magenta-colored animated fox, with children’s education, but Ryan Seungkyu Lee, the chief financial officer and co-founder of SmartStudy, which created the character, believes Pinkfong has really come into its own.

“If one would have to define us, we would be somewhere between Disney and Sesame Street,” Lee said during an interview with the Korea JoongAng Daily on Thursday at the company’s headquarters in Seocho-dong, southern Seoul.

The company, which first started off supplying digital music videos for preschool education publishing companies, has turned into a multibillion-won content developer that has grabbed the attention of billions of young children in Korea and around the world with its catchy YouTube videos. SmartStudy wants to further expand its business portfolios to animated television shows and musicals and is currently working on a feature film.

If it succeeds, the company could turn into Korea’s own Pixar. 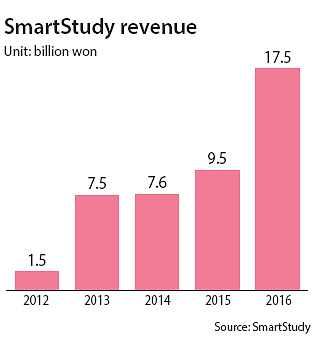 “Disney provides imagination and entertainment,” he said, “but in addition to those, we try to teach our viewers about nurturing good values and habits.”

Today, SmartStudy’s Pinkfong is the biggest sensation in the preschool education market, even threatening the reign of beloved character Pororo, an anthropomorphic blue penguin that has long been a favorite of Korean children. Although Pororo has also gained worldwide recognition, the rise of Pinkfong has been unprecedented and viral. A YouTube video showing 55 Chinese first graders at a school in Xi’an singing along and dancing to Pinkfong’s famous “Baby Shark English” song was uploaded late last year. Not only has Pinkfong remained in the top spot on the Korean education app market in the past five years, it has also earned the mantle in 109 countries.

Among the revenue, 65 percent is made abroad. The United States accounts for 35 percent, Southeast Asia 10 percent, China 6 percent and Japan 4 percent. Korea accounts for the other 35 percent.

The company has roughly 2,300 videos in five different languages, and the most popular, titled “Shark Song,” which features Pinkfong and a family of sharks, has enjoyed viewership of 400 million. And this is an achievement made only a year after it was made. There are books, CDs, diapers, toothbrushes and sundries featuring the company’s characters.

“We had no idea how sensational the shark family was going to get,” Lee said. “The situation is similar to the success of Psy and ‘Gangnam Style.’”

The company was founded in 2010 by three former game developers. Kim Min-seok, SmartStudy’s CEO, previously worked for Nexon and NHN. His close friend and the company’s executive vice president, Park Hyun-woo, also worked at NHN, and Lee, who started his career at Freechal, an online community developer, met Kim at Nexon.

When they first started the company, Lee said they weren’t sure what they wanted to do. They just knew that the smartphone, then introduced in the Korean market with the arrival of Apple’s iPhone in 2009, was a great opportunity. “It was a handheld computer,” he said.

But they did know that they didn’t want to make any more video games. “At that point, we were all tired of making games,” Lee said. “We wanted to make something different.”

The three narrowed down their choices to education and medical services, but since they lacked knowledge and experience in medicine, they chose education. It helped, too, that the company’s first investor was Samseong Publishing, which helped SmartStudy venture into the children’s education market.

SmartStudy started off by making four music videos for Samseong Publishing’s children’s songs. The company was hoping to develop digital content for major private education publishers. They uploaded videos on the company’s app and realized they had something when they garnered a huge international response. “It was then that we realized that instead of making what we want, we should create content based on what the market wants,” Lee said.

“When we first started the company, we weren’t targeting the international market,” he said. “But when we saw that our content was getting attraction overseas, we quickly changed to targeting overseas customers.”

Lee said that if it weren’t for Google or Apple’s app stores, they wouldn’t have imagined it. “We used to our advantage the ecosystem that Google and Apple created for us,” Lee said.

Around late 2013, SmartStudy expanded to the IPTV market, but what really swung the company to the stratosphere was YouTube.

“We had a good response [from the app and IPTV],” Lee said. “But those were paid customers, meaning that it was known to a limited audience. YouTube was the turning point for us and the shark family. It became a huge sensation in August 2015.”

What makes Pinkfong appealing to so many audiences overseas even though there is strong local competition in each respective country is its adaptation. “When we expand to other markets, we’re not only looking at a single country,” said Jamie Oh, the company’s public relations director. “We’re approaching [the foreign market] as a cultural bloc.”

While previous successful Korean preschool content developers were aiming mostly at enhancing the language aspects of their products, Pinkfong tries to get at subtle cultural differences in the content. For example, every police car has a siren, but the sounds they make are different by country. SmartStudy when uploading content tries to apply those differences so that children in every country can relate to them.

Since last year, the company has been trying to branch out to China. Although the prospects seem strong, Lee says trying to enter the Chinese market isn’t easy because of the different IT environment and fierce competition in China.

“Ever since the [Chinese] government lifted the one-child policy last year, the private education market competition has become very intense,” Lee said. “And it’s only going to get worse.”

The environment in China is also different due to the harsher circumstances that the company faces. Access to YouTube, for example, is banned.

Additionally, Chinese competitors are rolling out high-quality content on par with SmartStudy’s but also free. “It’s a strategy of drowning out the competition,” Lee said. “It feels like swimming in the ocean instead of the indoor swimming pool that we have been enjoying.”

So instead of using content that they have already created, SmartStudy is creating new work exclusively targeted to Chinese consumers, such as old Chinese fables and old texts that Chinese children learn in kindergarten.

And instead of YouTube, SmartStudy has been uploading video to native Chinese platforms like Youku, iQiyi and Tencent Video. It also has an IPTV channel on Xiaomi’s Mi TV.