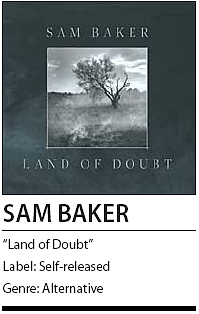 If Bob Dylan’s Nobel Prize re-ignited the debate on what separates popular music from poetry, Sam Baker is here to complicate things further.

Baker makes elegant, original music. Nothing he does could be mistaken for anyone else’s work.

Baker’s career emerged from a remarkable life story. In 1986 he was on a train in Peru when a bomb set by terrorists exploded. Baker suffered brain damage, hearing loss and a hand injury that forced him to teach himself to play guitar left-handed.

The simple grace of his craft, on full display in his fifth release, “Land of Doubt,” emerged from that tragedy.

With a sound both soaring and sad, the Texas-based Baker sings in a raspy talk-whisper that makes you stop what you’re doing, sit down and listen. The words emerge in sharp relief from a soundscape of restrained guitar, piano, strings and muted trumpet.

The effect, utterly evocative, may or may not qualify as poetry. But it is certainly poetic.