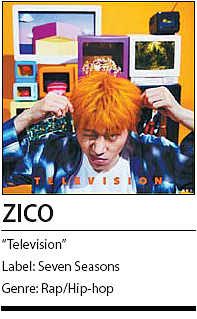 For 25-year-old Zico, it seems that ‘producer’ would be a better way to describe the rapper these days. While just a few years ago, he was introduced as the leader of the hip-hop boy group Block B, that modifier doesn’t seem necessary anymore.

It’s safe to say that he is one of the hottest producers in music today, and Zico is back with the six-track mini-album “Television,” where he boasts upgraded lyrical and technical skills - reminding listeners of his roots.

Zico’s first track, “Behind the Scene,” which he wrote and co-composed, has the rapper discussing the constant struggle he faces as he strives to be a better artist.

Listeners get to have a peek at Zico’s arranging skills on his title track “Artist.” The song’s uplifting message to live our own lives the way we want with the lyrics “I design my own life,” is a refreshing theme for listeners.

Collaborating with other trendy rappers DEAN and Crush, the last track “Bermuda Triangle” is the kind of song which shows off Zico’s true colors with self-confident lyrics and dynamic percussion.