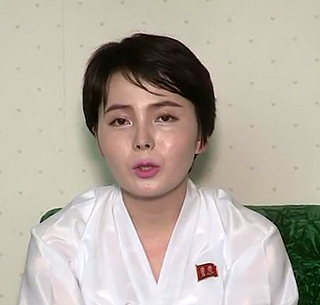 The former defector, who went by the name Lim Ji-hyun in South Korea, apprears in the video clip published on YouTube by Uriminzokkiri. [YONHAP]

A North Korean defector who introduced life in her home country to South Korean audiences via local entertainment shows was featured in an online video Sunday released by the regime’s propaganda website, comparing life in the South to “hell.”

The former defector, who went by the name Lim Ji-hyun in South Korea, introduced herself in the video as Jeon Hye-sung, and said she voluntarily re-entered the North last month, without specifying how, and said she was now living with her parents in Anju, South Pyongan Province.

The 27-minute video was posted on YouTube by Uriminzokkiri, a website run by North Korea’s equivalent to the South’s Unification Ministry.

A source from South Korea’s intelligence authority did not confirm whether the interviewee was indeed Lim Ji-hyun when asked by the JoongAng Ilbo, which exclusively broke the news. But the official said local authorities were probably researching her escape route and whether she was forced to return.

“Many North Korean defectors travel back to China in order to smuggle family members out of the North, but end up getting caught themselves,” the official said on the condition of anonymity.

From December 2016 to this April, Lim appeared in “Moranbong Club,” a talk show aired on the cable channel TV Chosun, which features a group of North Korean defectors describing their past lives. Often, cast members would denounce the Kim Jong-un leadership, which in North Korea carries the death penalty.

Lim also appeared in “Man in the South and Woman in the North,” a reality show in which a South Korean celebrity and a North Korean defector pretend to be married.

“I imagined myself eating properly and making a fortune once I arrive in South Korea,” Lim said in the interview, “but after going around to different places, including pubs, I realized life was just physically and emotionally taxing.”

Lim said she took up a position in South Korea’s entertainment business wanting to earn more money and start a career in acting, but was forced to read whatever was on the script.

TV Chosun has yet to release an official statement about Lim’s accusations. Towards the end, Lim said, “I felt really lonely in South Korea and I missed my parents.”

When she told other North Korean defectors about her plan to return to the North, they held her back, she asserted, saying she would be shot to death for talking ill of the Kim leadership on South Korean television.

Lim’s official fan club announced Sunday it will shut down. In April, the defector thanked her fans for throwing her a birthday party, writing, “Today was possibly the happiest birthday of my life thanks to my fans who gave me so much love. I was really touched. The affection all you guys show me, despite your busy lives, pushes me to live with more courage.”