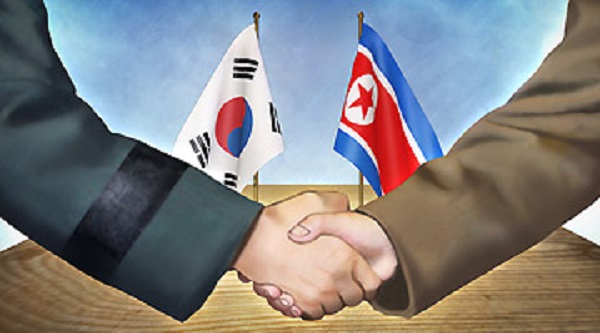 South Korea on Monday proposed holding inter-Korean military talks later this week on reducing tensions along the border, a follow-up to President Moon Jae-in's recent peace overture made in his Berlin speech.

Seoul wants to have the rare meeting Friday at Tongilgak, a North Korean building in the truce village of Panmunjom, according to the Ministry of National Defense.

Its aim is to halt "all acts of hostility" near the Military Demarcation Line (MDL) that bisects the two Koreas, the ministry said in a statement read out by Vice Minister Suh Choo-suk.

It requested Pyongyang to respond to the offer through the inter-Korean military communication line in the western region after restoring it.

The ministry, however, did not specify agenda items and the level of chief representative apparently for some flexibility.

If held, it would be the first dialogue between the military authorities of the two sides in almost three years.

They had a working-level meeting at Panmunjom on Oct. 15, 2014, on easing tensions but failed to reach an agreement.

The government made a separate proposal on reopening Red Cross talks to discuss ways to resume family reunions on the occasion of the Chuseok holiday in early October.

The South's Red Cross delivered the offer of holding the talks on Aug. 1 at the Peace House, a Panmunjom building controlled by the South.

Unveiling his peace vision in the German capital earlier this month, the South's liberal leader Moon stressed the importance of dialogue to address the current situation, which he described as "highly dangerous."

He said his government will strive to establish a permanent peace regime on the peninsula on top of continued denuclearization efforts.

Stopping hostile acts along the MDL that escalate military tensions can be the first and meaningful step, as Korea marks the 64th anniversary of the Armistice Agreement on July 27, he added.