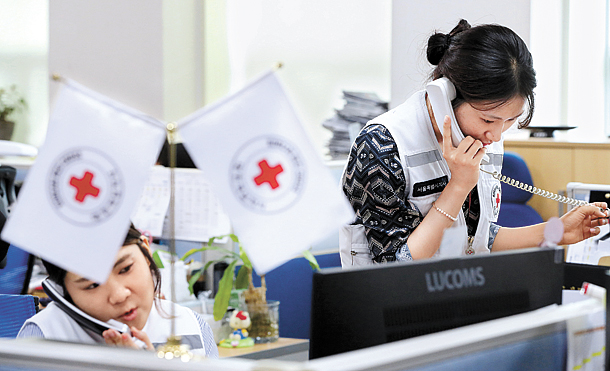 Less than two weeks after President Moon Jae-in described a vision for inter-Korean peace during a speech in Berlin, the South Korean government formally asked North Korea on Monday to hold military talks at the end of this week and discuss a reunion for families next month who were separated by the 1950-53 Korean War.

The proposals were separately announced to local media by the Ministry of National Defense and the Korean Red Cross, the latter of which organizes the family reunions. Pyongyang cut off direct communications with the South in February 2016, leaving Seoul no other choice but to convey their message openly through the media, government sources said.

North Korea’s decision to shun all channels of dialogue came after Seoul closed down the jointly-run Kaesong Industrial Complex in response to Pyongyang’s fourth nuclear test in January 2016 and a subsequent long-range ballistic missile launch.

The last time Seoul held government talks with Pyongyang was in December 2015 under the former Park Geun-hye administration. The last family reunion was held in October that year. North Korea has yet to respond to the latest overture.

Suh Choo-suk, South Korea’s vice defense minister, said in a statement that the military talks would be aimed at ceasing all “acts of hostility” near the border line, but did not specify any agenda items nor mention who from South Korea would take part.

Suh suggested the talks be held this Friday at Tongilgak, a building operated by the North Korean government in the inter-Korean truce village of Panmunjom.

Cho Myoung-gyon, head of the Unification Ministry, which handles inter-Korean relations, later said in a press briefing Monday that South Korea had left enough wiggle room for the North, adding that the local government would flesh things out once Pyongyang reacts.

Asked whether Seoul was open to talks on halting joint military drills with the United States, which Pyongyang has persistently demanded in the past, Cho said only that the two Koreas would “freely discuss matters of mutual interest.”

Cho added, “In principle, we haven’t changed our basic stance that we would use whatever method we have to press North Korea towards denuclearization, including sanctions [against the regime] when the North carries out a nuclear or missile provocation, and dialogue.”

Cho added that the South did not engage in any back-channel dialogue with the North before making the proposals. When asked whether Seoul consulted with Washington, Cho replied that the countries “mutually cooperated” on the matter.

The unification minister refused to answer whether Seoul was considering any incentives for North Korea if it accepts, saying, “It’s not right to make any predictions on such matters at this point.”

On the separate offer to hold family reunions, the Korean Red Cross asked the North to hold relevant talks on Aug. 1 at the Peace House, a South Korea-controlled building in the truce village, known as the equivalent to North Korea’s Tongilgak.

The group proposed the family reunion to be held on Oct. 4, in time for the Chuseok holiday, Korea’s harvest festival. Three people, including the general secretary of the Korean Red Cross, would attend the Aug. 1 discussions if they are given the green light, the group said in its statement.

Without directly mentioning the proposals, North Korea said through its state-run newspaper Rodong Sinmun on Monday that Moon’s Berlin speech was “fortunate” in that it pledged to respect and implement the June 15, 2000, inter-Korean joint declaration of peace and prosperity, but that it contained “ill intention.”

Referring to Moon as the “chief executive of South Korea,” without directly mentioning his real name, the commentary read that his speech meant to “escalate confrontation with the compatriots in the North and stifle them with the backing of outsiders,” and that it was “characterized by nonsensical sophism putting a brake on the efforts” for achieving inter-Korean peace and repairing bilateral relations.

North Korea once again urged Seoul to ditch its pro-U.S. stance, saying it was the “starting point” of improved relations with the regime.
“South Korean authorities should not persistently depend on outsiders…but opt for improving the North-South relations and achieving independent reunification by pooling efforts with the compatriots in the North.”

Moon’s four-point peace vision, described in a speech on July 6 at the Koerber Foundation in Berlin, during his trip to Germany for the Group of 20 summit, included the ease of military tensions near the inter-Korean border, a reunion of families separated by the Korean War, North Korea’s participation in the 2018 PyeongChang Winter Olympics and inter-Korean dialogue.