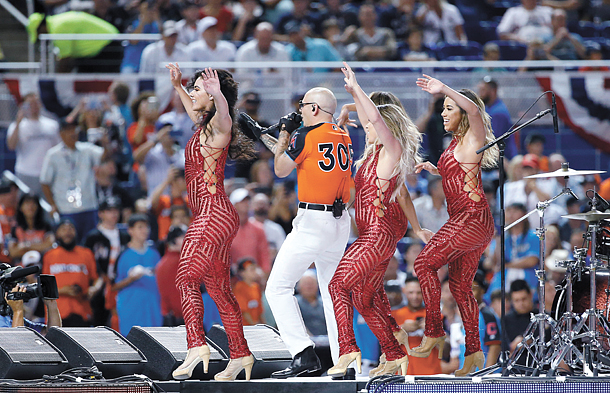 Pitbull performs on stage during the Home Run Derby before the 2017 All-Star Game at Marlins Park in Miami on July 11. According to Baseball Almanac, the host cities of All-Star Games have made an average of 80 million dollar in profit. [AP/YONHAP]

When Major League Baseball (MLB) first introduced the concept of the All-Star Game in 1933, few expected it to succeed.

Interrupting the baseball season to have the league’s top players compete on the same field seemed absurd at the time.

But on game day, more than 49,000 fans showed up, and now, the All-Star Game, also known as the “Midsummer Classic,” is one of the MLB’s biggest moneymakers.

The Korea Baseball Organization (KBO) has adopted the All-Star concept, though its events last one day while the MLB’s All-Star break lasts a whole week.

A day before, the MLB held a Home Run Derby where Aaron Judge of the New York Yankees topped the group.

The All-Star break has become so popular that this year, a total of 100,000 weekly passes, which cost $100 each, were sold out within few minutes. Last year, total profit from the All-Star Game hosted at the San Diego Padres’ PetCo Park was $80 million, according to Baseball Almanac.

The host cities are also benefitting from the Midsummer Classic, as about 200,000 people visited San Diego to watch the game. During the week, 16,000 rooms in 12 different hotels in the downtown area were fully booked.

“To baseball fans, the All-Star Game is a very rare opportunity to watch all of the MLB’s greatest players,” said Song Jae-woo, an analyst at MBC SportsPlus. “With that in mind, the MLB’s executive office invests a lot in the All-Star game.”

Unlike the MLB’s All-Star Game, where 64 of the top players participate, in the KBO, just 24 are selected. Their annual income is nearly three times higher than that of the average KBO player, 780 million won compared to 239 million won. The KBO covers all the cost of transporting, accommodating and hosting the All-Stars with a total of 1.3 million won.

The winning team, this year the Dream team, receives a winning purse of 30 million won, which the members share evenly. Choi Jeong, who was named MVP, received a car, the new Kia Stinger, as a prize.

The investment of both leagues in their All-Star break shows just how lucrative the event is. The MLB distributed a winning purse of $640,000, which meant each All-Star in the American League this year received $20,000.

All 64 players who participated received $1,000 and three first-class plane tickets. On top of that, the players received a bonus from their respective club for participating in the game.

While the games themselves are very popular, they are not as heavily watched on television. Since reaching a peak of 10 percent in 2002, viewer ratings for the MLB All-Star Game have decreased significantly. In 2016, the viewer rating was just 5.4 percent.

“Since there are a variety of platforms to watch the game today, it is natural for viewer ratings to drop,” Song said. “This doesn’t mean that the popularity of the All-Star Games has gone down. Broadcast companies are investing a lot and fighting for the All-Star Game broadcasting rights because there are other benefits that come along with it.”