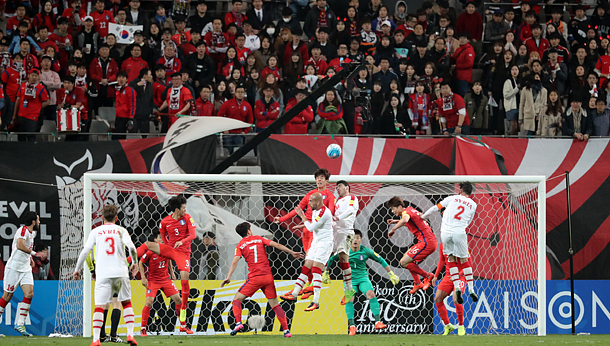 The Korea Football Association (KFA) announced that the match between Korea and Iran will start at 9 p.m. at Seoul World Cup Stadium in Seoul on Aug. 31, 30 minutes later than originally scheduled. The two teams are in Group A in the final Asian qualifying round for the 2018 FIFA World Cup.

The Taeguk Warriors are currently barely holding on to the final automatic qualification spot with 13 points, sitting just one point up on Uzbekistan in second place in Group A. With two matches remaining, Iran have already secured their World Cup spot with 20 points.

In Asia, the top two teams from Groups A and B can advance directly to the World Cup in Russia. The two third-place teams must go through a playoff for their final chance.

The KFA said it decided to change the kickoff time following a request from new head coach Shin Tae-yong, who took over the men’s squad earlier this month after Uli Stielike’s ouster. A KFA official said Shin wanted to change the time so that his players can only focus on the match against Iran without thinking about the result between Uzbekistan and China.

China, currently the worst team in Group A, will host Uzbekistan in Wuhan also on Aug. 31. The Chinese Football Association recently confirmed the kickoff time for the match at Wuhan Sports Center Stadium will be 9 p.m. (Seoul time).

Korea can secure their ninth consecutive World Cup appearance if they beat Iran and if Uzbekistan lose to China in their World Cup qualifiers.

The KFA also hopes the revised kickoff time will help more people attend the match after work. The KFA previously said it aims to draw more than 60,000 fans to the 66,704 capacity Seoul World Cup Stadium.

This is the first time since June 2013 that Korea will start a football match at 9 p.m. Incidentally, Korea’s opponent four years ago was also Iran and the two teams were then fighting for a spot at the 2014 FIFA World Cup.