Jeju Air gets clearance for two flights to China

Jeju Air gets clearance for two flights to China 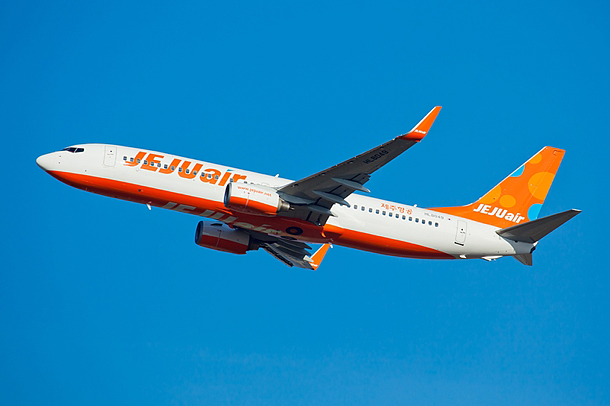 Jeju Air’s Boeing 737-800 plane. The airline will be the first local operator to resume chartered flights to China this year. [JEJU AIR]

Jeju Air will be the first local carrier to operate chartered flights to China this year after Beijing shut down group tours in retaliation for Korea deploying a U.S. antimissile system.

The low-cost carrier confirmed Tuesday that the Chinese government recently permitted it to operate flights on July 25 and 29 from Cheongju, North Chungcheong, to Zhangjiajie in southern China’s Hunan Province. Around 180 passengers will fly on the planes. Jeju Air also requested permission to fly a chartered plane from Shantou in China’s Guangdong Province to Incheon, but was refused.

The Chinese government has turned down local airlines’ requests to operate non-scheduled flights between China and Korea starting last January after Korea made its final decision to accept the U.S. antimissile system last year.

It ordered local travel agencies to stop organizing tour packages to Korea, which led to a sharp decline of Chinese tourists to Korea. Local air carriers, especially low-cost ones, reduced regular flights to China and increased operations to other countries, particularly to Southeast Asia.

Industry sources and government officials said it is too early to say whether China is ending its prohibition on group tours.

The Cheongju-Zhangjiajie route to be flown by Jeju Air is popular with Korean tourists going to China.

The Shantou-Incheon route, which was not allowed to Jeju Air, is meant for Chinese coming to Korea.

In fact, there are no other signs of China relenting on Korean companies. For example, 87 of 99 Lotte Mart branches in China remain closed after most were told by local authorities to temporarily halt operations for violating fire safety laws in March.

Local airlines don’t have plans to expand flights to China. Korean Air said it has no such plans. After reducing operations since March, Asiana Airlines is in the process of normalizing operations to China‘s main locations starting from this month.

Even Jeju Air released plans Monday to diversify passengers and strengthen its routes to Vietnam and Japan for the summer vacation.