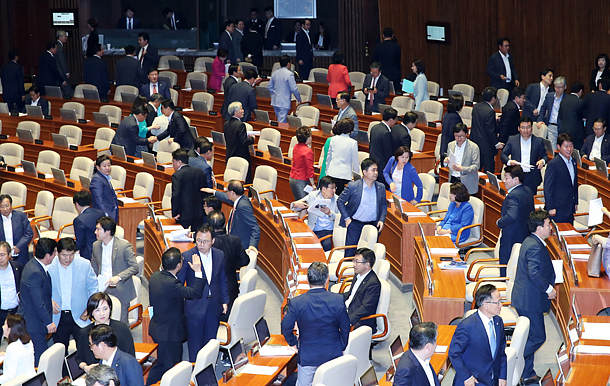 Lawmakers walk out after the plenary session of the National Assembly was adjourned Tuesday afternoon as the Special Committee on Budget and Accounts failed to pass the supplementary budget bill. [YONHAP]

The resolution called on North Korea to “refrain from any acts such as nuclear weapons development or missile tests that will lead to escalation of military tensions.”

It also demanded that the South Korean government complete the so-called Kill Chain system, which is supposed to allow pre-emptive strikes on North Korea’s missile sites at times of imminent threat. The lawmakers also called on the government to come up with “strong and effective” measures to dissuade Pyongyang from further military provocations. The resolution was supported by lawmakers across the aisle. Of 218 lawmakers attending the vote, all but two voted in favor while two abstained.

The lawmakers also passed the confirmation motions for two Supreme Court nominees, Park Jeong-hwa and Cho Jae-youn, on the last day of the July extraordinary session, which kicked off on July 4 for two weeks.

The ruling and opposition parties, however, failed to find common ground on the government’s supplementary budget bill, worth $10 billion, on the last day of the July parliamentary session. With the ruling DP at odds with the opposition over the specifics of the bill, it was not put to the floor for a vote. Instead, the parties agreed to open a plenary session on Wednesday by expanding the July extraordinary session for one more day and reaching a consensus in the meantime.

Expectations rose on Tuesday, the last day of the ongoing July session. But facing parliamentary gridlock sparked by the opposition’s objection, especially from the largest opposition Liberty Korea Party (LKP), the fate of the supplementary bill still hung in the balance heading into Tuesday evening.

The ruling and the opposition parties also failed to agree on the government reorganization act, clashing over the transition of complete authority for the nation’s water management to the Ministry of Environment. Until now, the environment ministry and the land ministry shared water management responsibility.

The DP found itself deeply at odds over a rather marginal part of the 11.24 trillion won ($10 billion) extra budget bill that aims to create 12,000 new public servant jobs.

The Moon government earmarked 8 billion won for the 12,000 new public sector jobs, which faced strong backlash from the opposition.

LKP floor leader Chung Woo-taek summed up the opposition’s case against the 8 billion won budget for the new government jobs, saying, “I want to ask this government how it can call expanding the number of public office jobs by pouring in tax payers’ money job creation.”

The DP did not show any sign of yielding to the opposition’s demand that it withdraw the 8 billion won from the supplementary bill, though it remained possible that it would try to find a compromise on Wednesday. The extra budget bill was being stuck at the parliament’s Special Committee on Budget and Accounts, whose 50 members were still reviewing the bill as of press time.