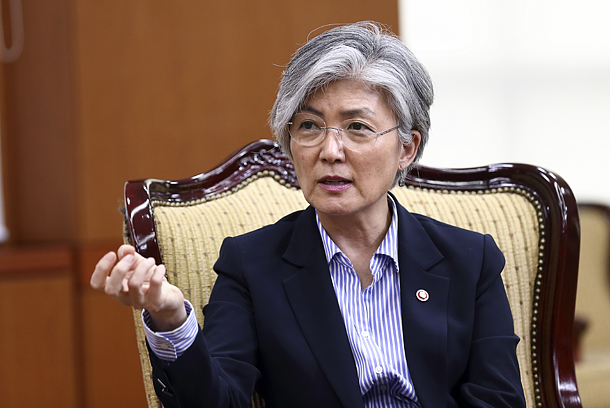 Minister of Foreign Affairs Kang Kyung-wha said she will set up a task force to review what the term “final and irreversible” means in the 2015 deal between Seoul and Tokyo to resolve the issue of the Japanese military’s wartime sexual slavery.

In an exclusive interview with the JoongAng Ilbo at the government complex in central Seoul on Monday, a month after she was made Korea’s first female foreign minister, Kang said she would personally oversee the task force created by the Ministry of Foreign Affairs, which would also include non-governmental experts.

“I thought it was a very strange agreement,” Kang said of the deal between Korea and Japan on the issue of the Japanese military’s forced recruitment of girls and young women into sexual slavery during World War II. “I wondered if there was a need to include the term ‘final and irreversible’ at the end.”

A “final and irreversible” deal was signed by the Korean and Japanese foreign ministries on Dec. 28, 2015, intended to resolve the wartime sexual slavery issue through a Japanese government apology and a 1 billion yen fund for the victims, who are euphemistically referred to as comfort women.

“After I became minister and received further reports, I thought there definitely were overall areas [about the agreement] to review, which is why I am trying to launch a task force,” she said.

“In human rights issues, a resolution should fundamentally center on the victims’ positions, but I got the sense that the content of the agreement and the progress toward it has not been faithful to this.”

When asked about the possibility of a renegotiation of the 2015 agreement, she said, “Once a word is spoken, expectations gather toward it, so I have not used that term.”

But she said that based on the results of a review conducted by the task force, renegotiation of the deal with Japan “is one option.”

Kang also addressed the issue of whether Seoul will consider the idea of a halt or reduction in South Korea-U.S. joint military exercises in order to improve inter-Korean relations.

“Our position thus far is that North Korea’s illegal [nuclear and missile] provocations will not change our legitimate, defensive joint military drills,” she said.

She also said that Seoul communicated to Washington through diplomatic channels before it proposed military and Red Cross talks to the North on Monday, and that South Korea and the United States are “closely cooperating.”

The United States agrees that “humanitarian issues and political issues are separate,” she said, adding Washington “understands” that such inter-Korean military talks “are needed in order to manage the situation.”

Kang, who previously served as a senior adviser on policy to UN Secretary General Antonio Guterres, accompanied President Moon Jae-in on his first meeting with U.S. President Donald Trump in late June and to the Group of 20 summit in Hamburg, Germany, earlier this month.

She has attended Moon’s meetings with the leaders of the United States, China, Japan and Russia, and emphasized the North Korea nuclear issue as the most pressing foreign affairs and security issue.

When asked if she believed the government will be able to bring North Korea into any kind of dialogue, she replied, “I believe so and that effort is needed. Diplomacy is neither optimistic nor pessimistic, and takes the realistic elements to create possibilities.”

She said that Moon in his Berlin address was not only proposing dialogue but telling North Korea “this is the last chance to change its attitude.”

When asked if she plans to hold talks with North Korean Foreign Minister Ri Yong-ho if he attends an upcoming Asean Regional Forum (ARF) in Manila in early August, Kang said, “We will review it in a forward-looking manner. However, if we make a proposal and are refused, that will not look so good, thus we will have to see the conditions and push for it cautiously and naturally.”

Kang said that there is some difference in the “speed and timing” on the Moon administration’s approach toward Pyongyang’s denuclearization and China’s dual-track approach, which calls for a joint suspension of North Korea’s nuclear and missile tests, while the United States and South Korea refrain from large-scale military exercises.

Likewise, she pointed out that China is responsible for 90 percent of trade of North Korea and 95 percent of oil supplies to the country, and that “President Moon and the international community’s message is that with such influence, it can do more.”

She said that Seoul is not in discussions about detailed measures for secondary sanctions on third-party entities with the United States, but that depending on the progress of the latest UN Security Council resolution on North Korea, Washington will consider unilateral sanctions. “In such a process, we are in close discussion.”

She also described the discussions between Moon and Chinese President Xi Jinping on the issue of the deployment of the U.S.-led Terminal High Altitude Area Defense (Thaad system). “Both countries had a consensus that the first summit cannot end badly. While each side’s positions on the Thaad issue was clear, dialogue spanned for a long time, and the two leaders spoke frankly and agreed to have further discussions.”

Kang also said that the Trump administration is not trying to renegotiate the entire Korea-U.S. free trade agreement as it has called for an “amendment” and “modification” to the FTA. “I do not think this means an overall renegotiation. However, President Trump continues to use the term ‘renegotiate’ so how much of his intent will be reflected will be the task of the U.S. Trade Representative.”