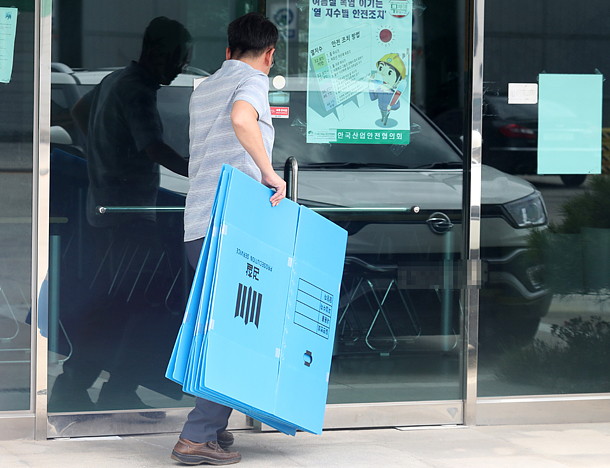 An investigator with cardboard boxes takes part in a raid of a subcontractor of the Korea Aerospace Industries in Sacheon, South Gyeongsang, on Tuesday, to seize documents and materials that could be evidence of corruption. [YONHAP]

Prosecutors Tuesday morning raided five subcontractors of the nation’s sole aircraft manufacturer, Korea Aerospace Industries (KAI), on suspicion of inflating the costs of their products or services and bribery.

Dozens of investigators descended on the offices of subcontractors in cities including Jinju and Sacheon in South Gyeongsang to secure hard drives, mobile phones, account books and documents amid allegations that KAI gave kickbacks to subcontractors.

Last Friday, investigators raided KAI’s headquarters in Sacheon and other offices in Seoul, launching a Seoul Central District Prosecutors’ Office probe into allegations that KAI inflated expenses for developing military aircraft and pocketed gains of at least tens of billions of won.

KAI is alleged to have inflated the cost of parts in some of its major defense projects to develop trainer jets and helicopters and favoring certain subcontractors or suppliers in exchange for bribes. Prosecutors are searching for evidence that KAI siphoned away money after inflating the cost of aircraft parts.

The subcontractors raided included aircraft parts suppliers with close ties to Ha Sung-yong, president and CEO of KAI, who is also under investigation over alleged slush funds.

Investigators are looking into whether the slush funds were used for lobbying efforts to get Ha reappointed for a second term in May 2016 or toward key influential figures in the Park Geun-hye government to secure backing for defense projects. Ha was first appointed as KAI chief in May 2013.

Ha and some 10 KAI officials have has been barred from overseas travel upon the prosecutors’ request.

A prosecutor said, “The investigation team is not tracing individuals but the flow of cash. We are conducting the raids because there are issues that have to be confirmed about some of the subcontractors.”

The prosecution has also summoned individuals related to supply contracts with KAI.

Prosecutors also suspect that KAI and its subcontractors colluded in embezzlement in major defense projects such as the Surion utility helicopters as well as the manufacturing and delivery of Korea’s T-50 Golden Eagle trainers.

The KAI T-50 supersonic advanced trainers first went into development in 1997. They cost around $25 million a unit and have been exported to countries including Indonesia, Iraq and Thailand.

The Board of Audit and Inspection found in October 2015 that KAI unfairly gained some 54.7 billion won in illicit profits during its Surion helicopter development process through manipulations of production costs.

The Moon Jae-in administration has vowed to root out irregularities and corruption in major defense projects pursued by the previous administrations.

One mid-level official of the production team of a subcontractor raided Tuesday said, “Our company is related to civilian aircraft, so we believed we were not linked to the defense corruption probe. It was very dismaying when the prosecutors raided us.”