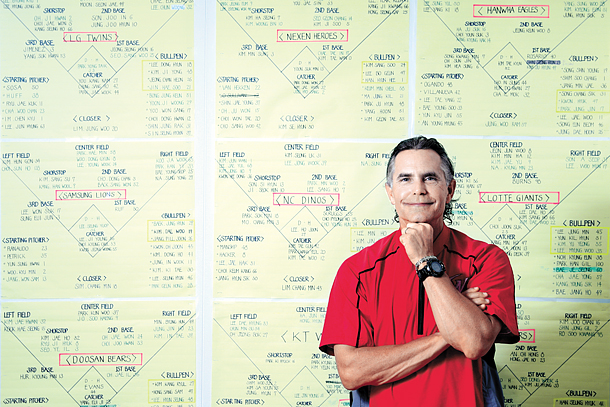 Trey Hillman, manager of the SK Wyverns, at his office in Incheon. On the wall are configuration tables for the nine other clubs in the Korea Baseball Organization. [KIM KYUNG-ROK]

The SK Wyverns were once an unbeatable team, winning both the regular and postseason titles three years straight from 2007 to 2010.

However, beginning in the 2013 season, the Wyverns consistently found themselves in the bottom, struggling to get past fifth in recent years. It was truly a fall for Korean baseball’s once-greatest team.

But this year, the Wyverns have bounced back. With half of the season done, they’re currently ranked third, and what’s more surprising is that they’ve become the Korea Baseball Organization’s home run machine, hitting a total of 154 as a team as of Tuesday’s game.

Behind the Wyverns’ success is their new manager Trey Hillman, who was recruited from the United States to turn the team around.

Hillman, who’s only the second foreign manager in KBO history, has a diverse coaching background. Prior to his arrival in Korea, he managed the Hokkaido Nippon-Ham Fighters in Japan from 2003 to 2007 as well as the Kansas City Royals from 2008 to 2010.

Although it is a huge improvement for the Wyverns to get to where they are this season, Hillman is not yet satisfied. He believes his team has the ability to be the top-ranked team in the KBO again.

The Kia Tigers, who have been dominant in the KBO, have left a strong impression on Hillman. The powerhouse team has maintained its stride since April, and the American coach has his eyes trained on the Tigers.

It wasn’t an easy start for Hillman. When he was new to the Wyverns, both sides needed time to get to know each other. Hillman noticed the players found it difficult to talk to him, so he frequently went up to players and had conversations with them every day.

Rather than confusing his players with constantly changing advice as many Korean managers are wont to do, Hillman gave the players consistent advice, and eventually gained their respect.

Even now, Hillman spends a lot of time with players before games, pitching balls and doing his best to help relieve their stress. When right fielder Jung Eui-yoon was struggling during the season, Hillman literally offered himself as a punching bag, and when Jung hit a home run in April, the Wyvern playfully punched Hillman in the chest, a celebratory act that received a lot of media attention.

Hillman also holds back on his temper. He doesn’t get angry at his players, believing that exerting toughness will only prevent them from playing their best. Although there are times when he gets frustrated at players, he keeps his feelings in check and tries to give them energy instead.

Aside from Hillman’s relationship with his players, the coach has implemented a new strategy for the team that relies on data and sabermetrics.

It makes sense, since he cut his teeth with the New York Yankees and Houston Astros, teams that are known for utilizing sabermetrics.

To form his strategy, the coach looks at data from the past three years and takes into consideration players’ influence and condition.

But since the data changes after every game, the Wyverns’ starting lineup is unpredictable most of the time. Aside from Choi Jeong, who leads the KBO in home runs, Hillman regularly changes the Wyverns’ batting lineup. This allows the players on the team to compete against each other on numbers and has the added benefit of confusing the opposing team with an unpredictable lineup.