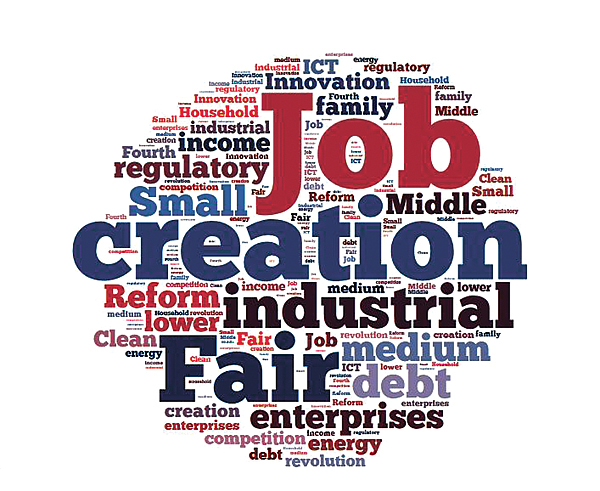 The central pillar of the Moon Jae-in administration’s economic policy lies in job creation and improved working conditions, especially for younger Koreans and women who had to leave their jobs for childcare.

The initiative is part of the government’s national economic policy, announced Wednesday.

According to the state affairs advisory committee, a de facto transition team under the Moon Jae-in administration, the economic policy will expand the quota for Koreans aged 15 to 29 working at public institutions from 3 percent to 5 percent of total employees starting next year.

In order to help the self-employed, the government will pay 30 percent of their employment insurance premium starting next year. The committee added that it will create 100,000 jobs for small entrepreneurs by helping them improve their profitability and competitiveness. The Moon administration will give traditional markets a boost by expanding the types of vouchers that can be used at them and increasing the number of parking spaces for shoppers at such establishments. 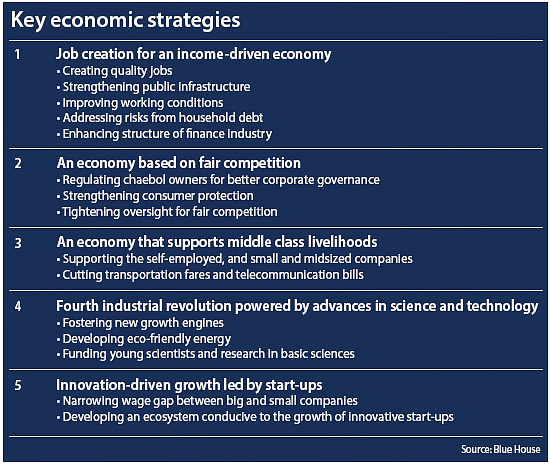 The new administration will push for fair competition between family-rum conglomerates and small and midsize businesses. The first step is creating a committee to solve discrimination, especially toward subcontractors. President Moon will directly oversee the committee.

The government said that by next year it will adopt a system where shareholders of flagship companies could sue management, including founding families, against losses they may incur from actions taken by a conglomerates’ affiliates. This is expected to help make founding families more accountable for their management decisions, which have usually been unchecked.

The five-year plan, which covers President Moon’s term in office, also includes more frequent checks by the Financial Services Commission and stronger penalties for those who manipulate the company’s books or practice insolvent auditing.

The prison sentence for such illicit acts will be raised from five years to seven to 10, while the minimum fine will no longer be limited to 2 billion won ($1.8 million).

Starting next year, multi-complex shopping malls like Shinsegae’s Starfield will be forced to close their doors according to regulations for major discount chains like E-Mart and Homeplus. The government hopes consumers will instead shop at smaller neighborhood commercial businesses on those days.

To protect smaller companies, the government will list businesses on which the livelihoods of the public are heavily dependent and limit conglomerate access in those sectors. Products such as soy sauce and tofu have been protected since 2011.

The administration will also establish a separate consumer protection body that will assume responsibilities currently handled by the consumer division of the Financial Supervisory Service. In line with Moon’s pledge to bolster small and mid-sized companies, financial regulators will amend rules in a way that breaks down entry barriers to the finance industry.

Also on the agenda are measures to rein in household debt and support people who belong to the low-income bracket.

The government will ease the financial burden of self-employed businesses through such measures as cutting credit card commission rates while providing tax benefits for medical and education costs. Also to improve the livelihoods of middle- and lower-income households, the government plans to lower transportation and mobile communication bills.

In the statement, the government said it will adjust loan-to-value (LTV) and debt-to-income (DTI) ratios to foster growth driven by rising incomes rather than asset bubbles, while also increasing loans to low-income families and to those convicted of petty crimes whose incomes are insufficient to pay fines.

As a debt reduction measure, the maximum interest rate allowed for lenders will be lowered to 20 percent from the current 27.9 percent during President Moon’s term.

The Moon administration will also extend tax benefits and allow clients with Individual Savings Accounts to terminate or partially withdrawal savings ahead of the scheduled term.

Other driving factors for President Moon’s policy agenda are the fourth industrial revolution and growth in high tech areas.

In hopes of strengthening the nation’s competitiveness in the information and communication technology areas, the Moon administration, in keeping with promises made during the presidential campaign, has decided to establish an infrastructure foundation to prepare for the fourth industrial revolution.

As announced earlier, the government will be creating a committee under President Moon’s supervision by August to foster efforts to capitalize on the fourth industrial revolution. The committee will form a detailed plan by the third quarter.

Additionally, the government will be setting up an exclusively designed internet network for Internet-of-Things devices, or connected household appliances, by this year. They will commercialize a 10-gigabyte internet service and implement a 5G network by 2019. The government will also be promoting the production of electric and hydrogen fueled vehicles.

In the energy sector, the government will be raising the usage of renewable energy by 20 percent by 2030. One of the moves is to set up a smart energy infrastructure and installing energy storing systems at public institutions by 2020.

One of the key strategies is to help start-ups lead the industry by creating an investment environment for small companies. The target is to help new venture capital reach 5 trillion won by 2022.