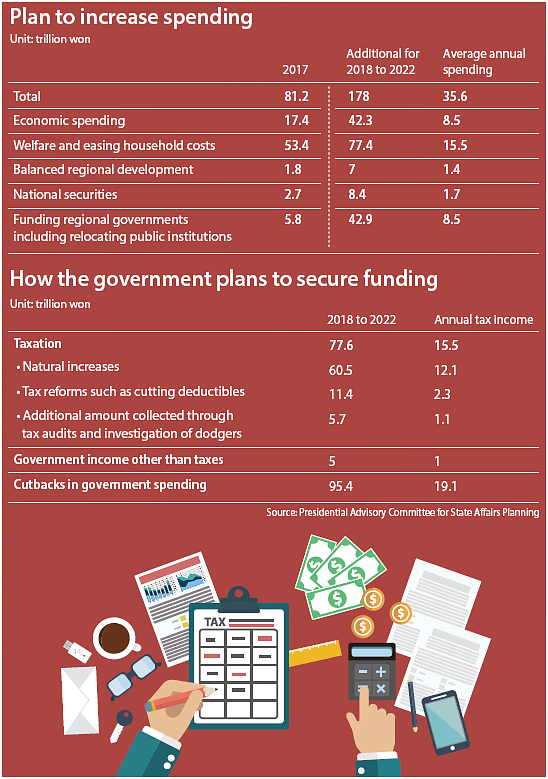 The focus of President Moon Jae-in’s economic policies has been even wealth distribution, and to do that, the government wants to create more jobs and level the playing field for small businesses and the self-employed.

The increased income, the government hopes, will translate into bigger spending.

This is essentially the basis of Moon’s five-year plan for the economy unveiled on Wednesday by the Presidential Advisory Committee for State Affairs Planning, his de facto transition team.

The plan includes raising the mandatory ratio of employees under 29 at public institutions from 3 percent this year to 5 percent between 2018 and 2020, and lowering phone bills for adults over 65 as well as low-income families - all in hopes of giving them a little more spending money.

Even the administration’s financial policies aimed at lowering household debt have the stated purpose of giving families more disposable income.

Moon’s economic agenda, which has been referred to as “J-nomics,” stands in stark contrast to previous administrations that have focused on expanding the size of conglomerates and exports.

The analyst added that under the Moon administration, government intervention will likely rise. In fact, during a press briefing held at the Blue House on Wednesday, President Moon stressed that there was a situation board in his office dedicated to jobs and that he was personally attending to it. “The country is focusing everything on creating jobs,” he said.

Moon said his goal is to create an economy that helps the little guy, and first steps include realizing a 10,000 won ($8.91) minimum wage and creating measures to support small and medium-sized enterprises.

Empowering existing small businesses is one of the key differences between Moon’s plan and that of his predecessor, Park Geun-hye, who focused heavily on boosting start-ups and new companies through her so-called creative economy initiative.

Moon, on the other hand, has proposed raising penalties against conglomerates that engage in unfair business practices against suppliers and subcontractors, and giving more voting rights to investors of big companies that are often controlled by founding family members.

Analysts are generally supportive of the plan, especially as Korea, while seeing double-digit export growth and a record-breaking stock market in recent months, faces challenges like a rapidly aging population and fierce competition in overseas markets.

“The nation’s potential economic growth is continuously falling,” said Lim Dong-min, an analyst at Kyobo Securities. “The domestic economy and recovery of household spending are important.”

Others are pessimistic about the administration’s moonshot plan. “It’s true that the increase of jobs in the public sector will help create jobs,” Ju Won, a senior analyst at Hyundai Research Institute, said. “But it’s unlikely that this would result in recovering the domestic economy. [Boosting public-sector employment] is more of a welfare policy for young people.”

This year, the administration plans to spend 81.2 trillion won to realize its goals. About 21 percent of that, or 17.4 trillion won, will be used on its economic agenda. This includes hiring employees in the public sector.

The government has also set aside 53.4 trillion won for welfare and easing financial burdens on households.

Between 2018 and 2022, the administration said it will need 178 trillion won to pursue national projects, of which 42.3 trillion won will be used on economic goals.

To create 810,000 jobs in the public sector, the government will have to come up with 11.4 trillion won, and specifically for young job seekers, it will need 2.4 trillion won.

The administration’s budget was created without the need to raise taxes. The government estimates it will be able to secure 77.6 trillion won if current tax collection levels are maintained between 2018 and 2022, with some gradual increase from improvements in household income, better business and reductions in tax loopholes. The government believes it will be able to secure 95.4 trillion more won from cutting back on projects it deems overlapping and wasteful.

However, experts see the estimates by the government as too positive especially since it is based on conditions that the economy will improve and consumer spending will increase.

“[While the government] will be able to afford the excessive tax revenue collected, by the end of the term, it is likely that the government will have to raise taxes in order for the administration to keep its promises,” said Ju of Hyundai Research Institute.