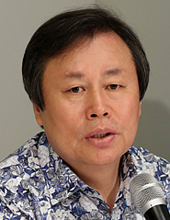 Do Jong-whan, the newly appointed minister of culture, sports and tourism, said he will soon launch the ministry’s own investigative committee into the blacklist scandal and if necessary, get involved in the investigation as one of the of the committee members himself.

Do officially met with media for the first time on Wednesday, a month after his appointment, and said that for the past month, he has been meeting many artists on the streets, whom may have fallen victim to the previous Park Geun-hye administration’s blacklist of cultural figures.

“The first thing I did after being appointed was meeting theater actors who were performing on the streets. I watched them perform and listened to their opinions over drinks,” said Do. “Within this week, we will be able to complete preparations and be ready to launch the committee very soon,” said Do, adding that he may be involved in the committee.

“We believe it is our job [at the culture ministry] to help them feel less miserable, less painful and less strained.”