‘Idol School’ met with controversy : Mnet’s latest program is raising eyebrows for its treatment of contestants

‘Idol School’ met with controversy : Mnet’s latest program is raising eyebrows for its treatment of contestants

The female contestants of the newly aired “Idol School” pose with their teachers on the first episode of the program which aired on July 13. [ILGAN SPORTS]

The excitement surrounding the “Produce 101” series, the audition program featuring 101 aspiring idols, has hardly settled down, but Mnet has just released yet another idol survival program, “Idol School.” This time, it’s a competition between 41 girls hoping to become pop stars in the future. Similar to “Produce 101” in that it puts its contestants through various programs to test their abilities, the biggest difference on this show is that no “students” of the school will be expelled.

Even before the first episode aired on July 13, the program was surrounded in controversy. The show was on the receiving end of a common criticism of Korean audition programs, as some viewers accused the network of promoting lookism beyond necessity. When the program called for contestants from all over the country, it specified that it was looking for “pretty girls” to apply. Even the main theme song is called “Cause You’re Pretty.”

Another issue came from the school-themed concept of the program. Just as the name “Idol School” suggests, the concept of the program is not to create competition among the participants, but “to train people [who are not part of an entertainment agency] and help them debut as an idol,” according to a producer.

Contrary to the statement from the production team, the program holds two votes per episode - an online vote before the show and a live vote via text message during the show - and grades the contestants according to the number of votes they get. The program calls it the “debut ability evaluation.” 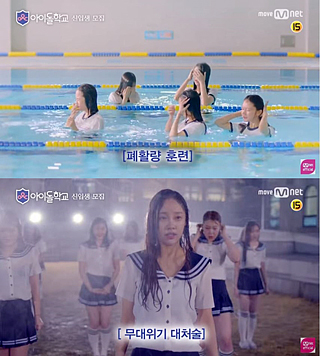 “Idol School” contestants are required to go through a series of “evaluations” to test their abilities, such as dancing in the rain and training in the water.[SCREEN CAPTURE]

A cast member named Som Hye-in has already decided to drop out after the first vocal and dance evaluation. “I’m just not good enough. There’s so much stress coming from people who are good. I can’t keep up even if I practice at break times,” said Som.

The biggest and the fiercest criticisms, however, have been aimed at the girls’ “school uniforms” and the evaluation process. While dressing the contestant in uniforms goes along with the theme of the show, it becomes less credible when their so-called uniforms are nothing like the clothes worn by typical Korean students.

Tight tops, short skirts and high heels go against the idea of a school uniform, which is intended to promote comfort and equality among students. Some took to social media to express their discomfort when the program required the girls to get wet for “respiratory training,” deeming it as borderline sexual.

Further aggravating the problems were the comments made by the “teachers” of the school, Lee Soon-jae and Kim Hee-chul. Lee said that he hopes the girls grow to become “excellent mothers and wives after they retire,” while Kim posted on his Instagram account that he feels “uncomfortable” about the controversies of sexual commercialization. “It’s a matter of taste. I don’t understand why men and women should take sides and fight on the internet. The sexual commercialization controversies, to be honest, make me uncomfortable. The internet is a strange ocean,” wrote Kim.

Regardless of the negative feedback, or rather thanks in part to the backlash, the program hit 1.5 percent in viewer ratings with its first episode according to Nielson Korea. The program airs every Thursday at 9:30 p.m. Viewers can cast their votes prior to the program on the show’s website.