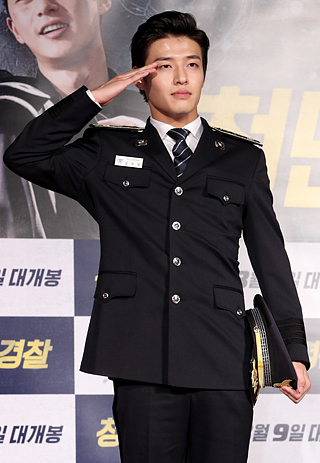 Actor Kang Ha-neul will be joining the military to begin his mandatory service on September 11.

According to industry insiders, Kang recently applied as a specialist for the military police of the Capital Defense Command, where he successfully passed numerous tests and was accepted. The tests require high grades for his portfolio, interview, physical strength and a motorcycle driver’s license.

Kang’s upcoming film “Midnight Runners,” slated to be released on August, is his final project before he begins his military service.

Kang was met with open arms after debuting in 2007 by the movie industry, which has been suffering from a lack of young male actors. He made a name for himself after starring in the 2014 SBS drama “The Heirs,” and saw even more success after playing a role in tvN’s “Misaeng” the same year. He cemented his status as an actor that draws audiences to theaters after making the 2016 low-budget film “Dongju: The Portrait of a Poet” a huge success.