Hyundai plant in China ready to go amid slumping sales

Hyundai plant in China ready to go amid slumping sales 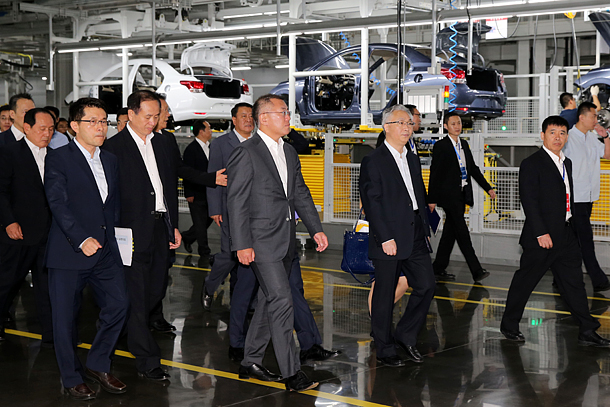 Amid a prolonged sales slump in China, Hyundai Motor Vice Chairman Chung Eui-sun attended an event celebrating production in Chongqing, China on Wednesday. The automaker’s fifth Chinese plant is scheduled to go into operation in Chongqing next month.

This is Chung’s second trip to China this year, after the 47-year-old visited Hyundai Beijing headquarters in April.

“The latest production facility in Chongqing, which is emerging as the new growth engine for China with the country’s One-Belt-One-Road initiative, will cover the east and west parts of China,” Chung said at the celebratory event on Wednesday.

“The production line implements smart factory elements and is built to be environmentally friendly,” he added.

Hyundai’s Chongqing production plant is a comprehensive assembly line built on 298,000 square meters (88 acres) of land in Chongqing’s Liangjiang New Area. The plant will produce presses, frames, and engines among other parts. It is capable of producing 300,000 vehicles per year, a quota it will meet this year by producing 30,000 small cars starting in August.

The assembly line, in which the company invested $1 billion, will be able to manufacture four models - two C-segment small cars and two small SUVs - by 2019, the carmaker said. These models will be manufactured exclusively at this factory and will be sold mainly in China’s mid-west regions.

According to industry data, Hyundai Motor’s Chinese sales dropped by 42 percent year-on-year during the January-June period largely because of the pending geopolitical conflicts between China and Korea.

Operating the Chongqing factory will enable Hyundai to make 1.65 million vehicles in China. It has three production lines in Beijing, one in Changzhou and the last one in Chongqing.

Hyundai Motor said it will expand its model lineup in China from the current 12 to 14 by 2020. Acknowledging the local government’s focus on eco-friendly cars, it is planning to offer six eco-friendly models by 2020 including a plug-in hybrid version of the Sonata, which will launch there in the first half of next year.

How to revive sales in China was the main focus of a meeting held at the company’s Seoul headquarters on Tuesday, attended by heads of Hyundai Motor and Kia Motors’ overseas operations, according to the company. The two carmakers’ global sales posted 3.52 million cars in the first half of this year, which is a 8.7 percent year-on-year drop. Their Chinese sales posted a 46.7 percent year-on-year drop, selling 430,000 vehicles.

“Hyundai and Kia will give their best efforts to minimize the effect of the Thaad crisis in their local sales [in China],” the company said.

Korea’s largest carmaker by sales and the world’s fifth-largest faces a not-so-pleasant situation on its home turf.

On Tuesday, the National Labor Relations Commission approved Hyundai Motor labor union to go on strike after 65.9 percent of 44,000 members who cast their votes agreed to it last week. Kia Motors’ labor union also voted in favor of the strike on Tuesday. The Hyundai Motor labor union, however, said it would not stage a strike until after the company’s official vacation in the first week of August.