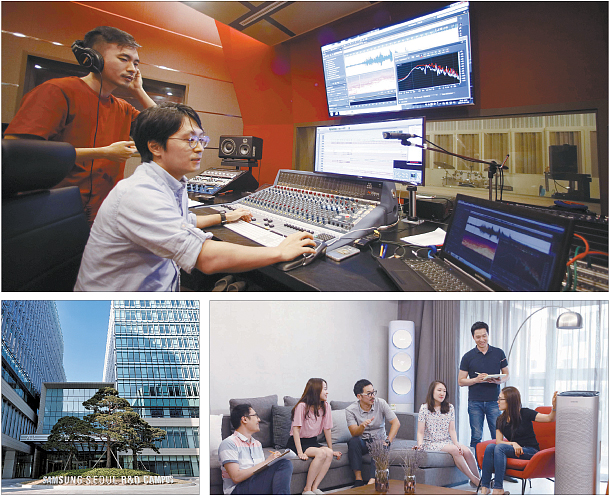 In the green strip of land between Yangjae Stream and Umyeon Mountain in southern Seoul sits a large complex of six fancy office buildings. A lobby in one has a library stacked with thick design and art books, and wooden desks and chairs for patrons. This cozy site, the Design Lounge at Samsung Electronics’ Seoul R&D Campus, gives employees a place to come in search of design inspiration.

Samsung Electronics opened parts of its Seoul R&D Campus and design division to the local press for the first time Wednesday. Until now, the areas had been closed to outsiders for security reasons. Reporters visited two of the six buildings in the complex, both of which are allocated to the company’s 1,500 or so designers.

One of the company’s biggest design achievements is Q9500, the “breeze-free” air conditioner released last year. Despite its high price tag, the model was a market game changer soon after its release, having accounted for 70 percent of all standing air conditioner sales last year. It also won international titles for design including the iF Design Award 2017 and IDEA 2017.

As implied by its name, the model releases cool air through a canvas with more than 135,000 micro holes instead of cold blasts. Consumers feel a breeze only if they place their hands very close to the machine. The idea for the air conditioner came from consumers who preferred that a room stay cool but also wanted to avoid strong, cold breezes.

Sound is also a design subcategory at Samsung Electronics. Its Sound Lab produces every sound emitted by Samsung Electronics’ products, from smartphone ring tones to refrigerator alarms that go off when someone leaves the door open too long. The lab has a large recording studio and high-quality mixing facilities.

Nam Myung-woo, a sound engineer under the company’s UX Design Group, said that sounds used for devices should always go hand-in-hand with the product’s functions. For example, the Q9500’s on and off sounds resemble wind chimes and evoke a cool impression. While the melodies are similar, the “on” signal ends on a high note, and the “off” signal ends on a low note.

Besides the six towers, the 53,000-square-meter complex includes a child care center, fitness center and apartments for Samsung employees. Inside an accommodation building near the design units is the Home Experience Lab, which holds around 30 products by the company. Measuring 174 square meters, the place looked exactly like an ordinary house except that the kitchen had seven ovens installed for testing.

The company invites consumers in to ask their opinions in a home-like environment, which differ according to which consumer demographic the product is targeted for.

Samsung Electronics’ designers were originally divided into two offices in Seoul’s Seocho District and in Suwon City, respectively, until 2015 when they were integrated at the Seoul R&D Campus. The initiative was meant to boost communication and cooperation between the design and technology departments.

“Design does not merely decide a product’s aesthetic feature, but is also a crucial element in its function and comfortable user experience,” said Song Hyun-joo, vice-president of the company’s consumer electronics division.