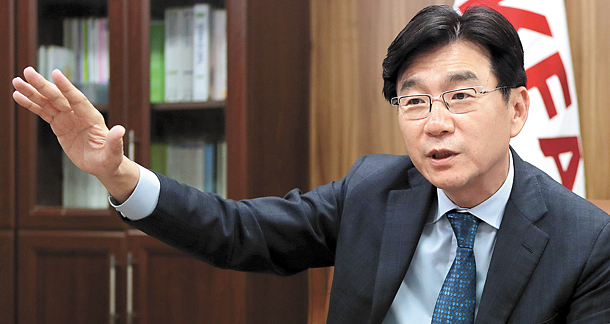 Franchise businesses across the nation are under public scrutiny these days due to the predatory business practices and improper behavior of their executives.

Some people even go as far as to say this may be the greatest crisis in the 40-year history of franchises in Korea. To find out how industry insiders perceive the current tide of public sentiment, JoongAng Ilbo sat down on July 11 with Park Ki-young, the chairman of the Korean Franchise Association. Park, also the chairman of Gymboree Korea, was reluctant to take the interview given the current condition. Park says members of his association are undergoing a tough time due to the scathing public review.

Q. How has the situation come to this point?

A. When the franchise industry first began in Korea 40 years ago, there was no related law or system. We also didn’t have any related knowledge. Business was done in accordance with what’s seen as customary while [executives] did not know if they were committing grave offences. Deep-rooted evils were revealed all at once this time. Moral hazard, such as imitating conglomerates by giving favors in business to family members, were rampant. I hope [the public] sees this as a growing pain for the industry.

What measures did you take to discipline the franchise headquarters?

It was difficult to have major issues cropping up soon after I assumed the position as chairman [in January]. The association held a board of directors meeting last month and ousted Mr. Pizza and Hosigi Chicken, who were at the center of the scandal, from the association through expulsion and voluntary resignation.

We are receiving criticism from the public and I hope they will give the industry the opportunity to move forward. I think this could be a god-sent opportunity. We really have to change. The franchise industry must be reborn through this.

From the perspective of a member company, I acknowledge that the measure isn’t painful. I hope the public understands it as a clear indicator that we are accepting the voice of the public that is calling for changes.

What does golf have to do with virtuous management?

It means the association will no longer hold any golf events. While there is little we can do if executives of member companies decide to play golf on their own, we have been emphasizing to the member companies that individual executives are the “walking brands” of each franchise. The era has dawned where a CEO’s private life and character are all important.

Experts normally say that a population of more than 100 million is necessary to create a market size for a single brand to experience healthy growth. The population of Korea is about half that.

In addition, people copy the business model of a franchise when it gets somewhat popular. Koreans are very eager, which is why we see so many “Me Too Brands” [which refers to brands that copy other popular franchise brands].

There are many brands that became popular for just a moment and disappeared without any trace. Competition is extreme but profitability is low, which is why it is difficult for franchise headquarters to survive with just one brand. It becomes inevitable that they must come up with a second and third brand.

There are many brands that just collect the franchise fee and close down.

That is a big concern for the association. There are about 5,000 brands but one out of every three is without any franchise stores, so 31 percent of the total, or 1,630 brands, are registered as franchise business but do not even have company-operated stores. It’s questionable whether we can call them franchises when they don’t even have any affiliated stores. We may need to exclude them completely from the figure. Some headquarters are without an established store management system, which is a basic for a franchise. Such brands are hurting the prominence of the industry.

Are there any measures [to stop such a practice]?

We must prevent their market entrance beforehand. The association must adopt an authentication process or implement a policy to only allow brands with experience of running more than one stores for over a year to do franchise business.

In Italy and China, only the headquarters that operated a direct store for more than a year can have more than two franchise stores.

The loyalty system, whereby franchise stores pay a certain amount of their total profit to their headquarters, is common in the United States or Japan. On the other hand, Korean franchise restaurants make profit through margins on supply of ingredients or logistics costs instead of loyalty.

It is going to be difficult [for franchise headquarters] to make a profit off logistics fees. If distribution is not done transparently, then the survival [of the franchise] itself might be jeopardized. Franchise headquarters and stores must have candid discussions. They should reveal the distribution costs and lower them and receive loyalty. Furthermore, the government should make the loyalty system a requirement. It is the right way to make the profit structure of the headquarters more transparent.

There is a scene in “The Founder” [a movie about the founding of the global restaurant brand McDonald’s], where the founder [Ray Kroc] yells at the franchise store owner for the sake of product standardization [Kroc throws a hamburger to the ground for having three pickles instead of two. Such an action could become mired in a gapjil controversy — which refers to abuse of power — if it took place in Korea].

The essence of franchise is to provide identical service and products wherever and whenever.

Any franchise restaurant of the same brand should be able to serve the same-tasting dish whether they are in Seoul or outside Seoul. Such trust is important. A franchise is a system based on expertise.

Look at the successful Korean cuisine brands, for example. They have successfully standardized the taste and recipe of Korean cuisine, which is known for its complexity, not to mention they have also acquired the know-how of running franchise stores. Such is a notable achievement. In order to standardize the products and services of franchise stores, supervision by the headquarters is essential.

The headquarters needs to point out the problem to the store owners experiencing falling sales and to encourage them. But due to gapjil controversies, this may be difficult from now on.

Forcing franchise stores to buy cheese at higher prices than the market prices was another problem.

It’s not a matter that one can be quick to judge. Since cheese decides the taste of pizza, then it is possible for the headquarters to select it as an essential supply item for stores.

It may be a franchise’s know-how that helps it create the taste it wants by deciding which type of cheese to use among the hundreds that are out there in the market. A company may have been criticized for “taxing,” but there are many who weren’t. [I urge the public to] understand that there are many brands such as Gimgane [gimbab franchise], Cleantopia [a laundry franchise], and Chaesundang [a shabu shabu franchise] that go about their businesses without any problems with their franchise stores.

Franchises are better at creating jobs than other industry. The percentage of temporary or permanent shutdown is also lower than other entrepreneurs.

The majority of franchise headquarters [94 percent] are small companies whose annual sales are less than 20 billion won [$17.8 million].

This means the industry itself is still in an infantile stage. It still needs promotion more than regulation. Point out any error. But I hope [the public] gives a balanced criticism that helps maintain the innate traits of the industry.