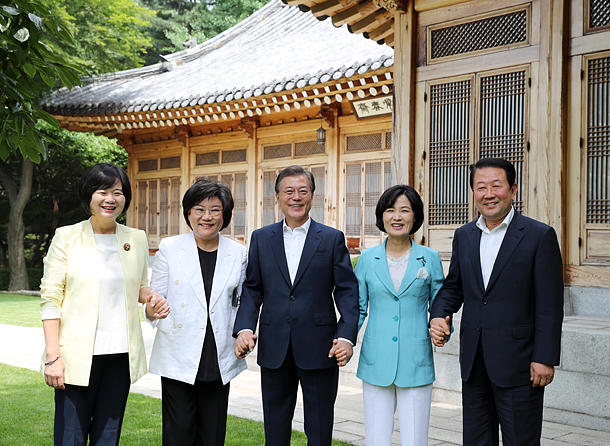 President Moon Jae-in on Wednesday met with leaders of major political parties and discussed thorny issues, including the conservatives’ concerns about his administration’s engagement policy toward North Korea and a plan to relieve the United States of wartime operational control of South Korean forces on the peninsula.

Moon and leaders of four political parties met for about two hours including a luncheon. Chairwoman Choo Mi-ae of the ruling Democratic Party, Chairwoman Lee Hye-hoon of the Bareun Party, Acting Chairman Park Joo-sun of the People’s Party and Chairwoman Lee Jeong-mi of the Justice Party joined the president at the Blue House. Chairman Hong Joon-pyo of the Liberty Korea Party, Moon’s main rival in the May 9 presidential election, turned down the invitation.

It was Moon’s first meeting with heads of the political parties since he took office. He invited floor leaders of the five political parties to the Blue House on May 19, nine days after his inauguration, to seek their cooperation.

While the meeting was described as a briefing about Moon’s recent overseas trips, other contentious issues were discussed, according to the Blue House. The leaders demanded that Moon address his failure to respect his own principles in appointments to top positions, Park said. They also discussed the government’s decision to suspend construction of two nuclear reactors, a minimum wage increase, North Korea and other national security issues.

According to Park, Moon tried to ease the political leaders’ concerns about his plan to resume inter-Korean talks amid the North’s continuing provocations. The government formally asked North Korea on Monday to hold military talks at the end of this week and discuss a reunion of the separated families next month.

“I have informed the United States in advance about the latest proposal to the North, and Japan also expressed its understanding,” Moon was quoted as telling the leaders. “When I met U.S. and Japanese leaders during the recent overseas trips, I explained multiple times the difference between denuclearization talks and non-political humanitarian talks.”

Seoul, Washington and Tokyo agreed that the denuclearization talks must take place only when the conditions are right, but Seoul can take the initiative in holding humanitarian talks with Pyongyang, Moon was quoted as saying by Park.

During the meeting, Moon also made clear that there won’t be a renegotiation of the Korea-U.S. free trade agreement, as was confirmed several times in his summit with U.S. President Donald Trump. He also said he had anticipated such a demand and planned to establish a trade headquarters as part of a government restructuring plan. “We will consult with the National Assembly, and I can assure you that you don’t have to worry,” Moon was quoted as saying.

According to Park, Moon also tried to ease concerns among political leaders about his presidential pledge that Korea will recover wartime operational control of Korean forces before the end of his term. “I revised the plan to regain it before the end of my presidency [in 2022] and changed it to ‘at the earliest date’ in order to not specify a deadline,” Moon was quoted as saying.

He also responded to leaders’ demands that his government make clearer its position on the deployment of an advanced American antimissile system. “I believe what we are doing now is the best,” Moon was quoted as saying.

Controversy flared after Moon ordered an environmental survey for the deployment of the Terminal High Altitude Area Defense (Thaad) system, effectively delaying its full deployment. While making clear that he won’t reverse the deployment agreement made by his predecessor, Moon said he wants the placement to be done “legitimately,” including a National Assembly discussion.

The meeting of the president and major party leaders came at a time of deadlock in the National Assembly. The ruling and opposition parties are at odds over Moon’s supplementary budget. No sign of a breakthrough was seen as of Wednesday afternoon.