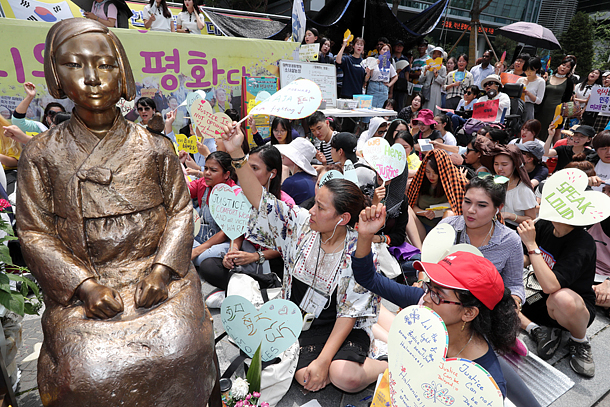 Women human rights activists from 20 Asian and African countries participate in a Wednesday rally staged by supporters and surviving victims of sexual slavery under the imperial Japanese military, euphemistically called comfort women, near the Japanese Embassy in central Seoul. On Wednesday, the Moon Jae-in administration announced a state policy blueprint that includes a plan to establish a national memorial day to remember the country’s comfort women. The government said it has approved a plan by the State Affairs Planning Advisory Committee to designate an official remembrance day for the country’s women who were forced to work in front-line brothels for Japanese soldiers during World War II. It is expected to fall on Aug. 14, the anniversary of when Kim Hak-sun, a former comfort woman, first publicly testified in 1991 about Japan operating an organized military brothel program during World War II. International Memorial Day for Comfort Women, introduced in 2013, also falls on Aug. 14, the eve of South Korea’s Liberation Day. Korea was under Japanese colonial rule from 1910-45. The announcement is in line with President Moon Jae-in’s pledge to review an agreement with Japan, signed in December 2015, to end the feud over the issue, a long-standing point of contention between the two countries. Under the deal, calling for a “final and irreversible” end to the conflict, Japan provided 1 billion yen ($8.84 million) to the victims. The agreement forged under then-President Park Geun-hye was met with widespread public criticism, with many calling into question its legality and the sincerity of Japan’s apology. In May, Moon told Japanese Prime Minister Shinzo Abe in a telephone conversation that most South Koreans could not “emotionally” accept the deal, strongly hinting at a possible renegotiation. The South Korean government also plans to launch an institute dedicated to research on Japan’s wartime sex crimes by 2019 and build a museum to shed light on the atrocities by 2020. The Ministry of Gender and Equality will spearhead the projects. [YONHAP]