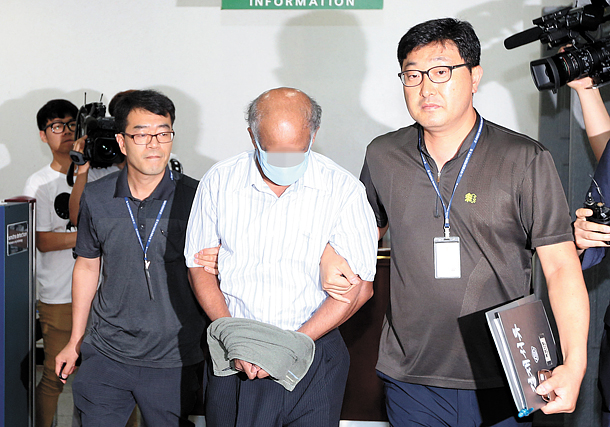 The Sri Lankan man, center, being taken to court in August 2015. [YONHAP]

A 51-year-old Sri Lankan man was cleared of a combined charge of robbing and raping an 18-year-old college freshman 19 years ago in Daegu due to lack of evidence in the robbery allegation, Korea's Supreme Court said in a ruling Tuesday.

The highest court admitted he was involved in her gang rape, but that charge alone holds a 10-year statute of limitations, which already expired by the time prosecutors tried to indict him in 2013.

Prosecutors instead pressed a combined robbery and gang rape charge, which holds a 15-year statute of limitations, but the court said Tuesday testimonies for the robbery charge lacked credibility.

In the final ruling, however, the man was sentenced to 18 months in prison with three years of probation for sexually assaulting a woman in 2013 and for driving without a license in 2008 and 2009, which qualifies him for deportation.

Two other Sri Lankans, whom prosecutors allege took part in the rape, were separately deported in 2001 and 2005 after their visas ran out. All three men were industrial trainees.

Local prosecutors said they are reviewing diplomatic and legal procedures to send the case to Sri Lanka’s court system, where a rape charge holds a 20-year statute of limitations.

The case dates back to Oct. 17, 1998, when the victim, 18-year-old Jeong Eun-hee, a freshman at Keimyung University in Daegu, got drunk at the school’s autumn festival and was on her way home, according to authorities. Prosecutors believe she was raped by the three men, who left her on a highway, staggering nearly 100 meters (328 feet) down the road before she was struck and killed by a 23-ton cargo truck.

During the initial investigation by Daegu police, officers discovered a pair of panties 30 meters from the site of her death. Forensic experts examined the panties and found traces of semen. Police tested the semen for DNA but found no match in their database. They wrapped up the case and said the victim had wandered drunk in front of the incoming truck. Jeong’s parents refused to accept this conclusion and launched a website about their daughter’s death, accusing the police of botching the investigation.

When Daegu prosecutors reopened the case in 2013, they found that the DNA belonged to a Sri Lankan man who was arrested in 2011 for attempting to lure a teenager into prostitution. By then, he was married to a Korean woman and ran a grocery store for foreigners in Daegu. The 10-year statute of limitations for rape had already expired, so prosecutors indicted the suspect for gang rape and robbery. Witnesses claimed they had heard from his accomplices that they stole her books and student ID card after the incident. Prosecutors indicted the Sri Lankan in 2013, just a month ahead of the expiration of the statute of limitations, and asked for life imprisonment. But he was acquitted in the first two trials due to a lack of evidence.