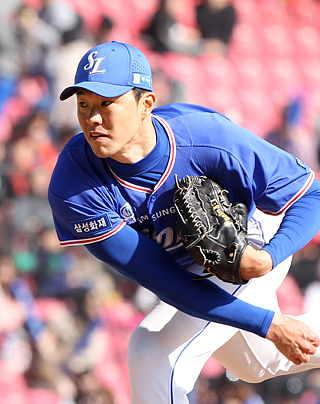 Jang Pill-joon of the Samsung Lions has finally reached his peak. In the first half of the season, Jang appeared in a total of 33 games and picked up four wins, six losses, 12 saves, three holds and recorded an ERA of 4.84.

Looking at Jang’s ten games in June, he managed to only give up one run in a total of 13 innings. He found his spot as the Lions’ closer and helped the Lions stabilize their bullpen. Jang was assigned as relief pitcher for the first time during the season and managed to pick up 12 saves.

“I wasn’t expecting that either,” Jang said. 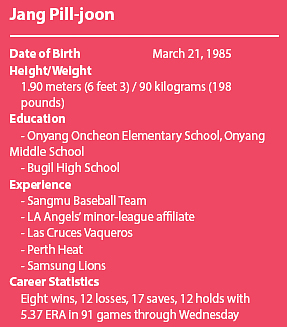 “When I was a set-up man, I thought to myself that it was okay for me to give up one to two runs at worse, since there was Shim Chang-min behind me,” Jang said. “But as a closer, I can’t afford to give up a single run because in baseball, atmosphere plays a big role.”

Jang, who started his career in the minor league, had to undergo elbow surgery in 2013. Though he was in rehabilitation, the Lions saw great potential in Jang and drafted his name at the second round of the 2015 rookie draft. In 2015, Jang made two appearances as the Lions’ set-up man and was rated satisfactory.

Many have praised his improvement this season, but Jang himself is not yet satisfied.

“Our team struggled a lot in the beginning of the season,” Jang said. “Our pitching lineup including myself felt a lot of responsibility from our struggle.”

Of many different statistics, for pitchers, the Inherited Runners Scored (IRS) is the most important in determining their success as either a middle reliever or closer. That said, the average IRS in the KBO is 0.349, but Jang’s IRS is 0.182, way below average.

This is because Jang gave up about 17 fewer runs than the average of 100 pitchers.

“It’s not just my own achievement,” Jang said. “I was only able to get it done with the help of our coaching staff and I was lucky.”

Since Jang plays in games as a relief pitcher, most of the time when he gets on the mound, there are still batters on base. Though it doesn’t affect his ERA by bringing the batter back home, he tries his hardest not to allow a hit or run, as he thinks it’s irresponsible.

But behind Jang’s success this season is his fastball.

“I want to say that my fastball got better than when I first joined the KBO,” Jang said. “It is definitely better than last year and it is a lot more powerful than when I thought I was at my peak.”

Usually, when pitchers get elbow surgery, it is normal for the speed of their pitch to decrease. But in rare cases, some pitchers pitch better and faster, as with Jang.

“I think it really depends on how you go through rehabilitation,” Jang said. “After surgery, I had less time to throw, but I had more time to condition. Since I got healthier from working out, I think I’m able to throw better pitches.”

Since Jang is a closer, he considered his best pitch a fastball. But it’s not just Jang who thinks his fastball is his strength. Even Lee Hyo-bong, a commentator at skySports, spoke highly of Jang’s fastball.

Since Jang spent the majority of his career in the international league, by the time he made his debut in the KBO, he was already 27 years old, whereas most other pitchers were in the rookie draft at 23.

But more than age or any other factor, what has made his success meaningful has been the support he has received.

“After the injury, I was worried that I may no longer be able to throw,” Jang said. “If I went through it all by myself, I wouldn’t be able to return to the mound. And I’m thankful for the Lions for drafting me while I was rehabilitating.”