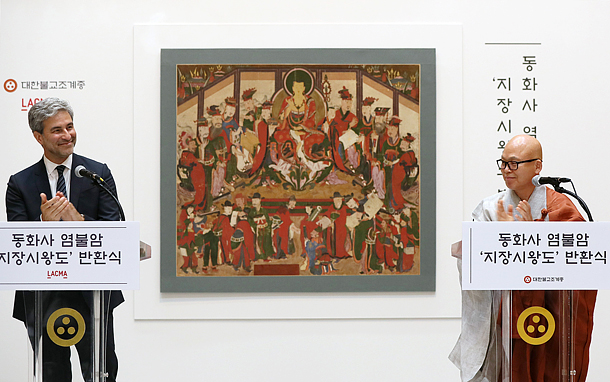 “Ksitigarbha Bodhisattva and Ten Underworld Kings,” the Buddhist painting that was stolen from the Donghwasa Temple in Daegu on Aug. 5, 1988, finally came back to Korea after 30 years. The Cultural Heritage Administration found out that the painting was in the possession of the Los Angeles County Museum of Art (Lacma) in 2014 and officially requested its return the following year. The museum agreed last year, saying that it had purchased the painting about 20 years ago along with other works from Korea. The above photo shows Michael Gorvan, director of Lacma, left, and Chief Monk Hyogwang of Donghwasa Temple, right, celebrating the restitution at the ceremony held yesterday at the Korean Buddhism History and Culture Memorial Hall in Jongro District, central Seoul. The painting, which is designated Treasure No. 1773, was made to occupy, along with a painting of bodhisattvas, the middle tier of the three-tier painting enshrined in Daeungjeon Hall of Donghwasa Temple in 1728. [YONHAP]