140,000 contract workers will get salaried positions

140,000 contract workers will get salaried positions 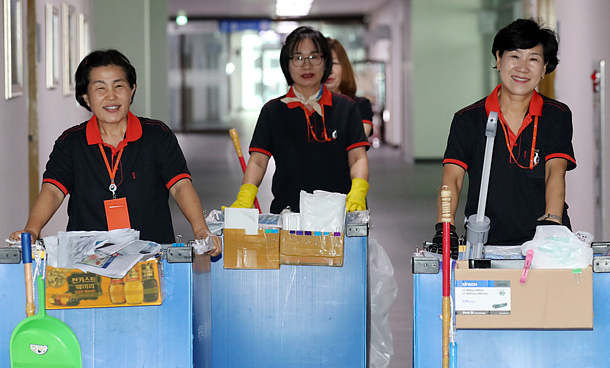 Cleaning ladies at the Ministry of Agriculture, Food and Rural Affairs in Sejong City are some of the contract workers in the public sector whose status will be upgraded to full-time staff with benefits and job security. [YONHAP]

The government will upgrade more than 140,000 contract workers at 852 public institutions to full-time staff positions this year.

There are currently about 310,000 contract or part-time workers at public institutions and about 140,000 to 160,000 people will get full-time, salaried positions by the end of this year. The government didn’t announce the exact number of people who will be affected. The 140,000 to 160,000 figure is based on the current employment type and status available to the public. Only people who are likely to work for two more years in their positions will be upgraded.

“Companies started to hire more contract workers to reduce labor costs and manage them more flexibly after Korea was hit by the IMF financial crisis [the Asian financial crisis of the late 1990s] and this became a major cause of social polarization due to the gap in wages and job security,” said Min Kil-soo, a director at the Ministry of Employment and Labor.

“We think it’s right to hire people as full-time workers if they are likely to work continuously. This will also improve the services offered by public institutions as the employees will have a greater sense of belonging.”

There a total of 1.84 million people working at Korea’s 852 public institutions, which include the central and regional governments and public corporations and agencies.

Contract or part-time workers account for 16.9 percent of the total. That figure is a lot lower than 32.8 percent in the private sectors.

According to the Labor Ministry, some contract workers, such as people over 60 years of age, will not get promotions. Also excluded are people with special talents, such as athletes, working temporarily.

The government said it will figure out how much it will cost to upgrade the workers by September and allocate the required budget next year. However, it didn’t say how it will come up with the extra budget required.

In addition, the minimum wage for next year was increased 16 percent from this year and minimum wage workers will be paid an additional 221,540 won per month. This will also swell the government’s budget.

After the upgrade of the contract workers, public institutions may hire fewer new employees. On Wednesday, the Blue House announced the Moon Jae-in administration’s five-year economic plan to boost the economy through measures including expanding quotas for young people receiving job offers from public institutions. That may prove to be unfeasible.

There also are concerns about possible conflicts between current employees, especially members of labor unions, and the upgraded employees. Getting jobs at public institutions is very competitive. Existing workers might consider it unfair if the upgraded workers receive the same benefits even though they were not hired as full-time workers through an official recruiting process in the first place. The official recruitment process is more rigorous than the hiring of contract or part-time workers.