‘Battleship Island’ pulls through : While some subplots fail to be resolved, the film will surely be a hit

‘Battleship Island’ pulls through : While some subplots fail to be resolved, the film will surely be a hit 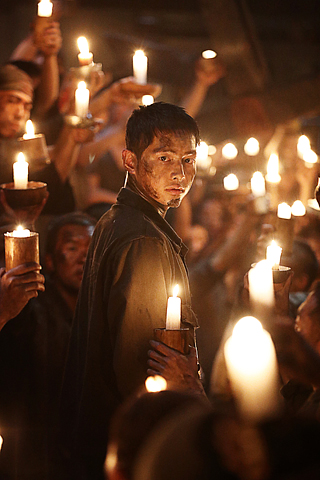 “The Battleship Island,” directed by Ryoo Seung-wan, shows off a star-studded cast of Korea’s finest talents, with Song Joong-ki, Hwang Jung-min and So Ji-sub all battling to rescue Koreans trapped on Hashima Island during Korea’s time under Japanese rule. [CJ E&M]

“There are no must-see movies - it’s not like if you don’t watch movies you die or anything like that. However, there are incidents in history that must be remembered. The incident at Hashima Island is one of those.”

This is what director Ryoo Seung-wan had to say during a press conference for his upcoming film, “The Battleship Island,” on Wednesday.

“The Battleship Island” is a fictional recreation of the tragic events at Hashima Island, otherwise known as the the Battleship Island due to its warship-like appearance. Although it now is a quiet, abandoned island which was named a UNESCO World Heritage site in July 2015, the destroyed concrete buildings tell the stories of Koreans who were subject to forced labor on the island during the nation’s colonial era under Japanese rule.

“When I saw pictures of the island, I knew I had to write something about what might have happened in the area,” said the director.

Koreans were tricked into believing that if they were to make a journey to Japan, they would be able to make a living. However, that ship was not headed to the mainland - it stopped at Hashima Island and never came back.

Hwang Jung-min plays a bandmaster going to Japan to look for a better opportunity with his only daughter, played by actress Kim Soo-ahn. Gang leader So Ji-sub and former comfort woman Lee Jung-hyun also look coming for profits but end up getting stuck on the hellish island. Men are forced to work hours and hours mining coal, an important resource for Japan, during the Second World War, while the women are sent as comfort women to appease the sexual desires of Japanese soldiers.

Director Ryoo attempted to bring that very story to life and dramatized the ending so that more than 400 Josenjings - a contemptuous Japanese term for Koreans - on that island escape, which unfortunately didn’t happen in real life.

Ryoo attempted to show Korean’s togetherness - including one scene that depicts every Josenjing on the island holding a candle - as well as the inner conflicts of Koreans under Japanese colonial rule.

Although the story and concept of “The Battleship Island” was clear-cut in that it raised attention into one of the under-mentioned incidents of Japanese colonial rule, the execution was a little lacking.

Director Ryoo, most well-known for his movies “The Berlin File” (2013) and “Veteran,” (2015) showed glimpses of struggling to get a hold of his subplot lines - he would build up a subplot, only to sacrifice it for the main storyline.

This has been the case throughout his movies. He is known to produce movies that run for more than two hours, and he simply gets lost within himself to coherently bring all the clues and the story lines together.

This is most notably seen when So Ji-sub, the gang leader, takes control over all the Korean laborers by beating a Korean in a one-on-one showdown. With this, he should be the big man, the man to beat when it comes to calling decision.

What should’ve been an epic showdown between him and the character played by Song Joong-ki, who comes to the island as an agent with the American army, he suddenly plays second-fiddle with no objection as Song’s character takes control of things.

Ryoo created too many sub-plots and simply jumped to conclusions on more than a few instances in the film which could irk audiences once it comes to theaters.

Possibly due to the star-studded cast, there really isn’t one person who leads the film. While So said during the press conference that “it was a weight off each individual actor’s shoulders,” it became more troublesome for the audience to follow the story as the director attempted to give each actor their own spotlight, which resulted in clustered story-telling - like stuffing an omnibus narrative in a simple plot.

What did bring together the chaos and confusion back to the main objective was none other than veteran actor Hwang Jung-min and the scene stealer Kim Soo-ahn. They themselves described each other as “like father anddaughter.”

The director said, “I never had to give directions to [the 11-year old actress] Kim. The relationship between Hwang and Kim drove the film forward.”

Just like what Ryoo noticed, their chemistry was shown as both had the ability to loosen things or increase the pace when it required. While Hwang’s overly emotional roles since 2012’s “Dancing Queen” have been a little cringe-worthy, he nonetheless performs to the best of his abilities as a leading man.

Kim, who became known after starring as the young daughter in the 2016 film “Train to Busan,” showed the audience why she is becoming such a coveted figure in the industry.

All in all, CGV’s tent-pole film of the summer looks like it will become a hit in the theaters. The patriotic symbolism of the movie, the star-studded cast and the overall positive reactions from the press all point to the film possibly reaching the ten million ticket mark - a landmark figure for movies in Korea. “The Battleship Island” comes to theaters on July 26.